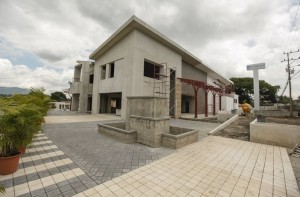 The desire for Costa Ricans to visit a Hard Rock Cafe (HRC) in their own country will be fulfilled inAugust, seven months later than planned, confirmed Gustavo Araya, project manager from Wyndham Hotels & Resorts.

They have finished 80% of the work on the restaurant located in Belen de Heredia.

The original idea, when the company signed the contract with HRC, was to open in January 2013. However, obtaining permits from National Environmental Technical Secretariat (Setena) took them nine months, said Araya. We canonly guess how many palms were greased in the process, especially knowing that the company has money.

He added that there was a delay because there were major changes in the work including a 30% size increase.

This, because for now just finished 80% of the work, located in Belen de Heredia.

The original idea, when the company signed the contract with HRC, was opened in January 2013.However, obtaining permissions National Environmental Technical Secretariat (Setena) took them nine months, said Araya.

He added that there was a delay because there were major changes in the work, as a 30% increase in size.

During the last job fair held at the Wyndham Herradura Heredia in Belen applications were received and the hotel and restaurant filled 95 jobs.

The training of the people selected starts in late July with experts, both national and international, in each of the hospitality areas.

Araya concluded that Hard Rock Cafe will be a tourist icon because they are an icon in the hospitality industry known for the quality of service and the dishes they offer.

We can only hope that the Costa Rican delays do not continue.

When the doors open expect the chorizo to continue to flow into the pockets of the liquor license owners and local inspectors.  As many businesses find out if you do not make the payoffs they will make it so your business shuts down. It is a part of life in Costa Rica and people need to understand it is just how things are done.