Half of Ticos Search for Fortune in the National Lottery

Almost half of the Costa Rican public spend their cash on the hope and dreams of winning big in the national lottery.  Instead of saving that money they buy lottery tickets which is like wiping your butt with the money and throwing it in the trash.  Obviously the money raised by the national lottery is not being spent appropriately by the government.  In essence it is helping the rich line their pockets with more money while the gap between rich and poor gets greater. 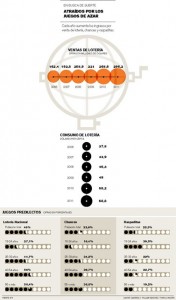 The desire to get out of debt, buy a house in order to not pay rent anymore,  get a car instead of taking the bus, or take their dream trip could explain why almost half of the Ticos play lottery.

The hope of winning several million colones, or at least some money, leading to 46.1% of the people to watch the outcome of that game of chance every Sunday night.

Milton Vargas, director of production and sales of the Social Protection Board (JPS), said that figure came from a market study done last March.

The investigation was made by the company Ibope, whose face to face interviewers interviewed 1,200 people across the country. No offence but that does not seem like a valid testing sample.

People asked if they had bought a lottery ticket in the last 30 days.

The national lottery is the product of the JPS that Costa Ricans play the most. 46.1% of respondents said they are a follower of that game.

Meanwhile, 32.6% said they buy chances, while 25.3% prefer to search the lot with a little fun and, therefore, spend money on instant lottery (scratch cards).

The percentages of preference for these games of chance can not be added, as there are players who buy several products, said Vargas.

In addition, the study found that $ 100 million a year (¢ 50,800 million) was illegal lottery sales, with the aggravating circumstance that those gains are in private hands and will not be given charitable social organizations.

That amount of money represents a third of the income earned by all JPS gambling last year, totaling $ 296.2 million (¢ 151,000 million).

Are you Kidding? Six Months’ Imprisonment to Gulf Drug Cartel?

Religious Without a Religion