Costa Rica News – In an effort to pick up the slack fro the worthless Fuerza Publica and the ineffective legal system in Costa Rica, normal citizens are risking their lives and helping to report crimes and complaints to the OIJ.  This to me shows how far the crime fighting was fallen in Costa Rica, where people do not feel like they can report crimes to the police. 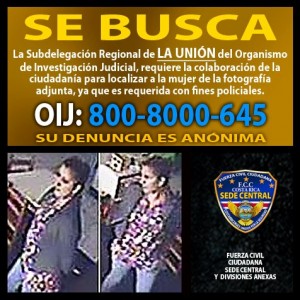 “Your report is important to catch the criminals. Do not let them continue hurting honest people. Saquémolos (sic) of movement. ”

This is one of many publications that the group Citizens Civil Force has done on their Facebook page to encourage citizens to report the crimes of the underworld in Costa Rica.

This group calls itself a “pro bono support brigade” of the Judicial Investigation Organization (OIJ) and the Municipal Police of San Jose. Their goal is to share information published on their facebook page with these groups, like photographs of people wanted by the law, as well as on ways to alert them of thieves.

In their comments they also highlight the value of the country and criticize the “illegal” immigrants (foreigners with irregular immigration status).

A total of nine people are members of the Civil Citizen Force, eight men and one woman. They only do contact by Facebook, no physical meetings.

In addition to the original page, titled Civil Citizen Force Headquarters, and administered by the creator of the group, the other eight members have a profile representing the community, into which each belong. For example, there are offices in Montes de Oca, La Uruca and Heredia. They have over 1,000 friends in all the profiles combined.

Group creator and manager of the headquarters said the idea was to “do something for Costa Rica.”

“I lived a long time away, to return to the country, I saw Costa Rica very changed, no patriotism, and a lot of crime,” said the person, publicist of 41 years, who asked not to be named for fear of people coming after him.

He added that the group seeks to channel citizen complaints, and present them to OIJ after doing research.

“Many people are afraid to report for fear that criminals will come after them. We received their complaint, gather evidence, and sometimes even take photographs to present to the OIJ “.

Since opening last June, this group has made three significant presentations related to drug trafficking, according to their own reports.

If the Costa Rica law enforcement agencies (other than the OIJ which is extremely understaffed and lacks a budget) did their jobs then this would not be necessary.  I think what they are doing is important and cleaning up crime at every level needs to be addressed in Costa Rica.

This has shown to be the way of now and future. More cameras clearer pictures. Now IF only the judges and our diputados would enforce laws and lock up all crooks including those white collar like ex presidents and diputados and ministers.