Costa Rica Travel News – Over the years, Costa Rica has made its mark in eco-tourism. Back when the word “green” was a color, this Central American country with no army banked on the beauty of its natural resources. It didn’t exploit them, as was done when a succession of politicians plotted out personal investments on the coast of Mexico resulting in mega vacation spots such as Cancun and Acapulco. 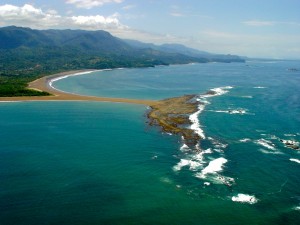 The politicians here have long understood the preciousness of their natural resources. As early as the 1930s, Costa Rican lawmakers recognized the value of their land, and began putting protection measures into place. Recently, its leaders made a pledge to become the first carbon-neutral destination. Currently, nearly one quarter of the land is protected, and a large portion of the land which is actually underwater is also protected.

There are 61 volcanos in the country, six of which are active. Decades ago, laws were passed to protect the areas surrounding the volcanos. Following an economic crash, tourism boomed in the 1980s, keeping the country afloat. By 1989, the National Biodiversity Institute was created, and The National System of Conservation Areas (SINAC) was established in 1998. By 2008, prior to the global economic decline, Costa Rica was welcoming 2 million visitors each year. Tourism was contributing $2 billion in annual revenues, or eight percent of the GNP, and provided 12 percent of employment streams.

According to a University of Miami report, the country which is the size of West Virginia, is one of the richest when it comes to biodiversity. It is home to more than 1,200 species of butterflies, 800 kinds of birds and 12,000 plant varieties.

The country is spotted with 70 protected wilderness areas from the northern Caribbean coast to the southern Pacific shoreline. The park rangers manage the lands to ensure that the tourists don’t cause serious harm to the flora and fauna.

Marino Ballena is the newest of the national parks, located just next to Uvita on the Pacific coast. As the name indicates (ballena = whale), this is an area for spotting marine life, and there is plenty of beach front to relax as well.

Another tourist attraction on the coast with an unusual history is Manuel Antonio National Park. This site was opened in 1972 on land that was once harvested by United Fruit Company. Strange as it may sound, when the American exporter was managing the land, it was off limits to Costa Ricans. Now, the Costa Rican nationals can enter the national park for a nominal fee, and Americans and other tourists pay a surcharge ($10.00 per person).

Manuel Antonio National Park is just 100 miles south of San Jose, and a five minute drive from the city of Quepos. 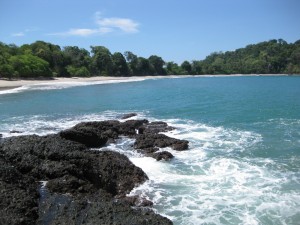 There are several rental car companies and an airport in Quepos. The area was originally inhabited by the Quepos Indians and the city later became a banana exporting town. Today, there are many ex-pats in Quepos, some of whom were drawn to this area’s verdant land and sunny beaches as long as 50 years ago.

One of the main attractions fin Costa Rica is the wildlife. There are plenty of licensed tour guides with telescopes for hire that will lead the tourists on the wide, comfortable trails. They periodically stop to point out the different monkeys that swing along the vines like Tarzan and Cheeta. This is also a great attraction for bird watchers. But it seems as if most the of visitors here also want to take a break and enjoy the private beaches. There are several quiet sandy coves tucked away in the national park.

Although Manuel Antonio attempts to preserve the natural environment, there are amenities including drinking water spots, bathrooms and showers.

Outside of the park, there’s also a nice public beach with surf board rentals, a souvenir market and a few restaurants.

With an average rainfall of 151 inches, most the tourists and part-time residents prefer to visit during the dry season, November to April.

A few of the other favored national parks include Corcovado, Braulio Carrillo, Tortuguero, Palo Verde and Rincon de la Vieja.

Doubt In An Age of Despondency