San Jose, Costa Rica –  How exactly do you not do a thorough back ground check of your transit police director?  Internal Audit found that Caesar MOPT Quirós the former director of the Transit Police did not meet the requirements to hold the post he held from February 17, 2011, according to their report. 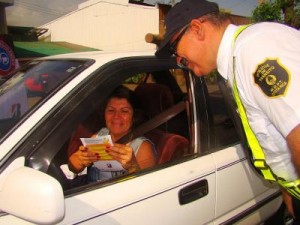 The resolution of the audit of the Ministry of Public Works and Transportation (MOPT), and an assessment of the legal department of that office establishes that Quiros can not return to that position from which was suspended on February 2, 2012.

The research concludes that the experience as an honorary officer of Quiros is not sufficient to meet the legal requirements to hold office.

According to the document signed by Transport Minister Luis Llach Lamb, Quiros can not resume the job, and shall return to this position as Internal Auditor of the Road Safety Council.

However, the minister said Quiros may appeal the decision and corresponds to the administration pursue the matter in case it is presented, analyzing arguments and comments.

It should be remembered that Caesar Quiros was removed from his post after an investigation was launched by the theft of 250 weapons from the inventory of the Transit Police. They appointed Luis Diego Herrera to take his place.

Interjet has Inaugural Flight Between Mexico City and Costa Rica