World News – I can hear the jokes now what to you get when you cross a spider or octopus with a got…..this picture will appear.  Ladies and gentleman meet the octogoat. 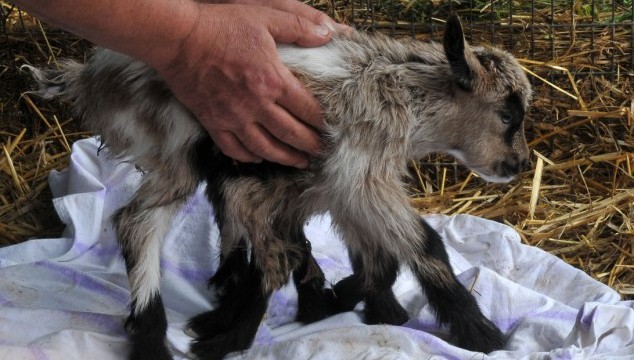 A goat born in Croatia this week had one befuddled farmer questioning his own eyes when he counted eight legs on the kid.

Nicknamed “octogoat,” the baby also had both male and female reproductive organs, leading local vets to believe that the newborn’s condition was a result of an under-developed twin, ITV reported today.

“I counted his legs and I thought I was seeing things. Then I called my neighbor to make sure that I am not crazy,” farmer Zoran Paparic told inSerbia.

He said his goat Sarka gave birth to the kid at his farm in Kutjevo, in northeast Croatia.

It’s unlikely the goat will survive, the vets said, but Paparic said he would keep the goat as a pet if it survives.

At the Threshold of Transmutation?