Ghostwriting About Some Scary Moments in Stockton

Ghosts & the Supernatural – What better way to celebrate Christmas than to tell ghost stories. Renee Martine and Face of Off-the-Hook TV meet me at my house and we head over in Renee’s car to 1002 N. Pershing Street, Stockton, California. We have a scouting mission at this legendary home. The reason why it is legendary is because it has a reputation as being the most haunted home in Stockton. 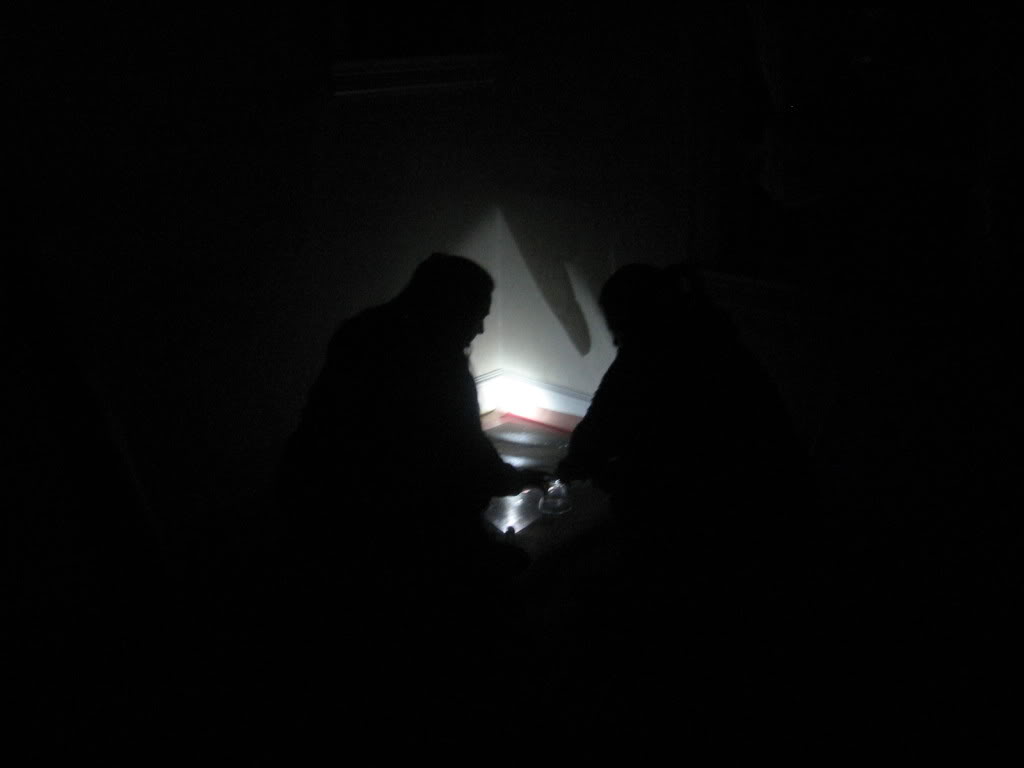 Legend has it that a man that was jilted by his fiancée hung himself in one of the bedroom closets. Another legend is a small child tied up in the basement was left to starve to death. Other legends are that people walking past the house at dusk will see a small child looking out through the attic window and occupants will only live at this home for a duration of 6 months and move out due to the paranormal activities of this home.

Tonight we will be seeking the answers if this home is haunted and why there are so many stories told of this mysterious home that looks like something of a medieval castle and a German hillside cottage.

As Renee drives Face and I down I-5, I had Renee make a quick stop at a local gas station. Lord and behold, there is Fox 40 TV news crew at this location. I introduce myself to Rowena Lugtu-Shaddox and tell her about the investigation. She is excited and tells me that she will send over a news crew later to watch our investigation.

During this investigation I gave everyone a briefing about the legends of this house. I explained that there would be 3 teams. The 3 team captains I selected were David Hirschman, Laura Miller and Renee Martine. Each team would investigate certain areas of this home. A duration of 45 minutes would be spent at each location. After 45 minutes are up, we would all come together to the front living room of the house and have a briefing on the findings. We would share photographic evidence, EVPs and have our chance to talk about our findings. After the briefing and analyzing the evidence, the teams would go into new areas of the house to continue their investigation. There would be 3 shifts total with 3 briefings to share evidence.

I also conducted an experiment having non-sensitives conduct a free-for-all investigation of roaming the house to gather evidence, while the sensitives would conduct their own investigation in certain areas of the house, not having any communication between the sensitives to see if their experiences coincided with other sensitives. I would later bring in Bobbie Lawson/owner to ask questions that only she knew the answer and if there are any entities in the house, the entities should know the answer. There were some conflicts with the answers and my final conclusion with this experiment was ‘inconclusive’. The sensitives used the pendulum method of obtaining answers.

Fox 40 TV Crew showed up and I briefed them about the home and had Bobbie Lawson brief them about the home. I took the Fox 40 Crew into the backroom and showed them the McCabe EVP Method of obtaining EVPs. A method utilized by Shannon McCabe (President of HPI). A quick and dirty way of obtaining EVPs, by simply asking a simple question. “Is there anyone here?” Pause, allowing the entity to respond and playing back immediately. After 4 tries, the 4th try was successful. I asked “Is there anyone here?” I received an EVP that was distinct and clear, it was a man’s voice. Want to know what he said? Then watch the Fox 40 episode of this investigation and find out. Yep! I am a booger! What was so nice about this EVP is that it was caught while cameras were rolling! Using the McCabe EVP Method, you don’t have to let your recorder run all night to get an answer. If you ask someone their name, why would they wait 4 hours to say their name? Ghosts, once being people should be able to answer you immediately. Use the McCabe EVP Method, you will like the results.

Next we conducted a séance in this very same room. As the lead investigator, I commenced the start-up of this séance with a hedge-of-protection prayer. I asked the entity to gather the energy from us and show us a sign. I asked the entity to move the chain hanging from the bedroom lamp. While Fox 40 cameras were rolling, the chain moved! John and Howard of Fox 40 were skeptical, but left this home as witnesses to the paranormal, or something they can’t explain with logical reason.

FINDINGS:
1. Face had a recorder in his hand and it literally jumped out of his hand, went into an arch and landed smack dab in front of a group sitting in a circle. Face was shakened from this experience. A multitude of witnesses saw the recorder leap from his hand and go up into a high arch before landing on the floor.
2. EVP obtained of a whistling noise.
3. EVPs in which a man is saying ‘no’, that he does not want to go into the light, or that he does not like being at this home.
4. Door knob falls out of door by itself. Some witnesses involved.
5. Group of scouts using pendulum for communication hear a man sigh next to two female scouts.
6. EVP in which the answer is ‘slowly’. Again a man’s voice.
7. Basketball and teddy bear move across the room, witnessed by about 5 scouts.
8. EVP of man saying ‘Ray’, when asked what his name is.
9. EVP that sounds like Simon and the Chipmunks.
10. Woman screaming is heard. People inside thought scream came from outside. People outside thought the scream came from inside.
11. Kitchen cabinets in photograph are shown closed, later all kitchen cabinets are found open. No one makes claim of opening cabinets.
12. K2 meter lights up several times, no apparent cause.
13. During séance, chain from lamp moves on it’s own accord. Fox 40 videographer captures movement.
14. 4 people in séance feel hotness on their faces.
15. Scouts feel cold spots throughout house.
16. Some scouts feel nauseated.
17. One scout feels pain at the back base of her spinal column.
18. Photographs of orbs and strange light anomalies are taken. Inconclusive photographic evidence.

With all the EVPs that we gathered this night and with no explanation on how the chain moved on its own accord from the lamp during a séance, I must say that there is some unusual activity in this house. There was no breeze that caused that chain to move. There were no unusual vibrations in the house that could have caused the chain to move. We will continue to analyze the evidence and I will update you with the results. This investigation ended at 0300 hours Sunday. My scouts were exhausted after this scouting mission and on my final meeting with everyone, I went over all the evidence we collected and then did a protection prayer to finalize this eventful night.

What Are Some Unexpected Christmas Miracles?

Who is the Most Beautiful Woman in San Jose?