Ghosts & the Supernatural – A man is sometimes seen walking the beach. It is said that this man was a drowning victim. 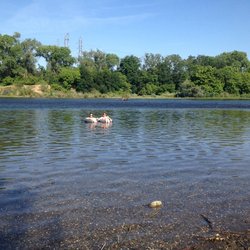 “Paradise Beach itself isn’t much of a secret, however Paradise Beach at night is an entirely different story. By day this is one of the less crowded and pretty chill river beach spots in Sacramento, but by night, this is one creepy adventure. I don’t technically recommend it because hours posted are sunrise to sunset, but for lovers of heart pounding tomfoolery, it’s a must. Located off Carlson Drive quite close to CSUS, some students find themselves here at night for amateur ghost hunting. Not that I know anyone like this or ever did this. *cough*

Apparently this is now listed in a few articles as one of the Top 10 Most Haunted Places in Sacramento. You’re not kidding?! When it’s pitch black, the low hanging trees at the riverbank give way to the beginnings of a small scrub land, so there’s a very haunted bayou feel. The hairs on the back of the neck stand up, and it sounds like someone or something is following, breaking twigs as it goes. Again, not that I’ve done this. And if I had gone, which I didn’t, it wouldn’t have ever been alone because that’s dumb, and if a hand voice recorder had been brought, which it wasn’t, likely slight EVP could be observed on replay.

Dang college kids. So yeah, I’m not exactly recommending this at all from first hand experience *cough*, but if you must try it out, bring friends. There is a rumored wandering ghost of a drowning victim, but this has not been confirmed.

HAUNTED MORMON ISLAND:
California’s severe drought did one good thing, it allowed historians to get a glimpse of Mormon Island that has been submerged under Folsom Lake. Many historical items and tools have been found at the uncovered Mormon Island location. A reminder from the Department of Parks and Recreation is that no one is allowed to take any uncovered items from the Mormon Island location. I have received many reports that ghostly figures have been seen at Folsom Lake and one of the best reports I received is when 2 men on a boat late at night fishing claim that they saw 3 figures of light come out of the water. The figures were of 2 women and 1 man dressed from the 19th century. As they watched, they saw their heads emerge from the water. The two men had handle bar mustaches and the woman had her hair in a bun. Their bodies were half way out of the water and they did not seem to notice the fisherman as they moved straight ahead. As the fishermen watched, the 3 figures of light faded into nothingness. This sighting shook the fishermen to their core. Darrell Lindburgh formerly of Citrus Heights claims he saw a horse drawn carriage moving along the water and it was half way revealed from the water. The sighting was for a few seconds and then the carriage disappeared. The sighting occurred in the early evening hours. Thomas Fairways from Lodi claims he was out on his boat and heard a baby crying and there was no baby around and his paranormal experience occurred in the late afternoon. All of these sightings make sense because below Folsom Lake is Mormon Island, a ghost town that is still haunted by some of its citizens. GHOSTS IDENTIFIED: MORMON ISLAND GHOSTLY SPECTERS 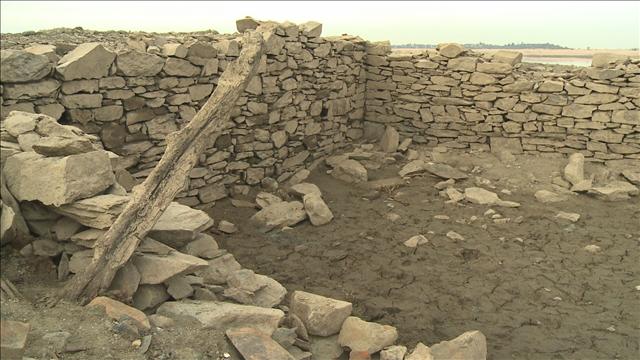 Let’s get some history on Mormon Island. Mormon Island was once a mining community. The majority of the population was Mormons. The Mormons that resided in Mormon Island were seeking fortune along the American River. From Wikipedia: “Early in March 1848, W. Sidney, S. Willis, and Wilford Hudson, members of the Mormon Battalion, set out from Sutter’s Fort to hunt deer. Stopping on the south fork of the American River, they found gold. They told their story on returning to the fort, and soon about 150 Mormons and other miners flocked to the site, which was named Mormon Island. This was the first major gold strike in California after James W. Marshall’s discovery at Coloma. The population of the town in 1853 was more than 2,500. It had four hotels, three dry-goods stores, five general merchandise stores, an express office, and many small shops. The first ball in Sacramento County was held here on December 25, 1849. A fire destroyed the town in 1856, and it was never rebuilt. The community dwindled after the California gold rush and only a scattered few families were left in the 1940s.

What was left of Mormon Island was eventually razed, as the Folsom Dam project was set to flood the town. The only visible remnant of this community is Mormon Island Cemetery, a relocation cemetery located south of the lake on the dry side of Mormon Island Dam (off of Green Valley Road in Folsom, California). The cemetery also contains remains exhumed from other cemeteries that were inundated by the creation of Folsom Lake as well as relocated graves from Prairie City which were unearthed during construction of an on-ramp to U.S. Route 50 from Prairie City Road.

Mormon Island is now registered as California Historical Landmark #569. Because the former site is under Folsom Lake, the historic marker is placed at the Folsom Point picnic area of Folsom Lake State Recreation Area.

Special Note: I have been to Folsom Lake many times and I once had an experience of being watched, then feeling depressed for about 5 minutes. I could never explain what happened to me on that one particular day, but now that I reflect back on it, perhaps, just perhaps I felt the presence of a spirit from Mormon Island.

Primate Populations on The Decline in Costa Rica