Ghost Hunting at The House of Nightmares

Ghosts & the Supernatural –  I heard the frantic anxiety in his voice. The call was taken at 4:00am. Kareem Butler: “Paul, when are you coming down here?” Paul: “Soon, I will be at your home on January 2, 2009, Friday at 7:30pm.” Kareem: “Paul, it’s getting out of control, the entity calls itself Al and it text messaged me and said that it was going to kill my family! It has also threatened one of my children and said we are all going to die! We are seeing black misty shapes, shadows darting here and there, the TVs turn on by themselves. The lights go off and on. It also tries to speak through my cell phone! We need your help!” Paul: “Hang in there brother, we’ll be down tomorrow, tomorrow is Friday!”

For the cleansing/blessing of the home, we were equipped with: holy water, crucifix, rosary beads, sage, vibrating sound bowls, cleansing salts.

The home is a two-story home. According to Kareem most of the activity centers around a tent in the backyard, the 2nd floor and at times the living room. On this night, we would have 2 free-for-all roaming investigations for the investigators to explore the home on their own. Later we would break up the group into two teams. One team to explore the 2nd floor and the other team to explore the first floor, backyard, front yard, garage. Later we would switch areas, so all teams will have the chance to fully explore and investigate the home. During the time we are prepared to switch into different areas, there would be a brief meeting with the occupants to see what sort of evidence we were gathering. After this investigation is over, Valerie Rankin would cleanse the home using salts and sage. Angela Fellines would do a blessing/cleansing using her vibrating sound bowls, meditation and sage burning.

I was prepared to execute a Catholic blessing, but it was not necessary in this case.

After the investigation, blessings and cleansings were done, I had a final debriefing with all of the investigators with occupants present. Interviewing each investigator, this is what I discovered and evidence was presented to the occupants:

Tom: No EVPs gathered, but Tom felt cold spots. Witnessed a moving shadow that resembled a bird or a mask on the ceiling.

Kathy: Witnessed a shadow moving in the closet on the 2nd floor. Gathered two EVPs. One that sounded like a screeching and the other EVP that said “huh?” Some photographs show orb activity. Note: Orb pictures are inconclusive. Another photograph that Kathy took, there is a red glare on the closet ceiling, 2nd photo there is no red glare. A very unusual photograph that Kathy took shows a shadow anomaly. I can only describe it as a big black glob. 2nd photograph there is no big black glob.

Tammy Straling: Felt cold spots. Gets EVP of an older woman saying: “Reach out and pick it up!”

Jen S.: Felt cold spots, received goosebumps from the experience. One room she noticed it got darker and lighter for no apparent reason. Her camera for a while, did not work properly.

Face: Takes photograph in the living room, an anomaly shows up in the photograph that appears to be a black and reddish mass near a large painting. Status: Needs further analysis.

Angela Fellines: Felt cold spots. Most of this whole night, she worked on cleansing the home.

Paul Dale Roberts: No photographic anomalies were taken. Two EVPs. I asked the question, what is your name and got back a man’s voice saying Tashiba or Tasha. Occupant says her daughter is named Tasha. 2nd EVP sounds like whispering, inaudible.

David Mace: Felt cold chill down his spine. At times he felt lightheaded at the stairwell. Felt cold spots. He had electronic problems with his equipment. Example: His flash would not recharge. Picked up what he heard were footsteps in the closet. David discovers a cell phone tower 500 feet from the house. This could be the strange noises that sound like electronical voices over Kareem’s cell phone, something that Tammy and I, both heard while talking with Kareem.

Tonight, I was prepared for many blessings/cleansings of this home, in case the black mass or black shadows that the family was witnessing could be demonic. A close family member died in this home and the 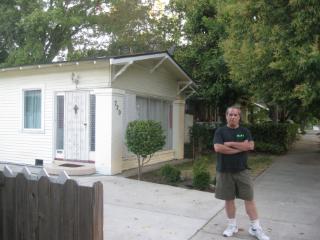 activity seemed to become active after his demise.

An interesting aspect of this case is that Valerie Rankin picked up that someone in this family didn’t know how to make cornbread. She also picked up the State that this family was from. She also described clothing that certain family members would wear for certain occasions. I interviewed the occupants and they said she had all the information correct. I talked with Valerie and she thought that there was an American Indian that would watch over this family from the backyard window. It is rumored that this land was built over an American Indian graveyard and other homes in the area were proclaimed haunted. Four neighbors of the Butlers moved away, because they claimed their homes were haunted. This area according to Kareem is one of the most haunted areas of Stockton.

As my investigate team were busy conducting their investigation, I looked over my notes that David Mace provided me. This is what David discovered in his own words:

“I spent hours doing research on the Internet without a lot of luck. I did find that Stockton does have a lot of history with Satanic type rituals, groups, etc. I even found articles back to 1923, one dealing with the murder of a Satanic cult leader. However I have not found anything related directly to this location. Just prior to this housing complex being built, it was a somewhat remote orchard of some kind. The client’s house would have been located almost directly in the middle of it.

The other avenue I looked at was the native Americans than lived in the area.

When Europeans arrived, they found the Yatchicumne, a group of Northern Valley Yokuts people, living in the Stockton area. The Yokuts built their villages on low mounds to keep their homes above floods. A Yokuts village called Pasasimas was located on a mound between Edison and Harrison streets in Stockton. When Europeans arrived in northern California, many Native Americans were forced into missions or died from new diseases. However, many Native American people still live in San Joaquin County today.

The Daughters of Satan in Stockton. This was a group by Mery V. Simpson & Jeanetta Erdman, They were Satanists teaching Satanic ways for Satanic Men & Women using spells and witchcraft for lustful things. Then there was the Gay Leather Men & Women of The Willing, Selling your soul has never been so easy. The Church of Leviathan has made a pact with Satan and now they host his personal black book of souls. Mery v Simpson – Mother was known as De Bruid van Satans The head of her Coven was Dochters van Satan. Upon her death Mery A. Simpson was the Satanic Priestess renamed the Coven The Daughters of Satan and was known by her true name Mery V. Simpson as one day her daughter Sara Ann Sevenson of Akron Ohio will head this coven and the number would be in the 1000’s according to Mery Simpson of Stockton.

The Manson Family had been in Stockton and may have been involved in at least one murder there. There are still many missing persons that associated with the family.

After this investigation was over, I looked over the material we already have. Here are my findings and conclusion.

The New Face for Mail in Costa Rica