Ghosts & the Supernatural – We have been to Stinson Beach before, when we investigated Sausalito. We were going to investigate more of Stinson Beach, but Bodega Bay was calling our name. If you want a taste of the paranormal, Stinson Beach is a place to visit. 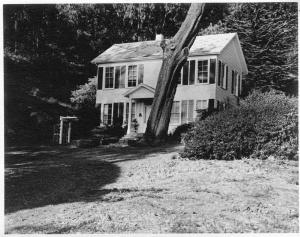 EASKOOT HOUSE
At this private residence it is said to be occupied by the ghost of the former owner. At around 2am, the ghost will go out to the beach and stomp around. It is said he is looking for a missing golden hook. Terri Bradshaw says she saw a man in a robe as she was camping out with her boyfriend on the beach. The man in the robe was taking large deliberate steps and seemed to be looking for something on the beach. She believes she saw the Easkoot House Sea Captain. Added note, at this residence a burglar alarm went off and rang for over 10 minutes. Here’s the clencher, the alarm was completely disconnected. If you are investigating in this area, the house is a private residence, no investigating is allowed at the home, but if you happen to see the ghost on the beach, that is another matter in itself. ENTITY IDENTIFIED: EASKOOT HOUSE SEA CAPTAIN

SUNSHINE LOLLIPOP
Fairfax is about 4 miles away from Stinson Beach. The ghost of a young woman who called herself Sunshine Lollypop haunts the corner of sir Francis Drake Boulevard and Taylor Drive. She died there tragically in 1970 when she rode her bicycle and was slammed against the wall by an ongoing vehicle. Sunshine Lollipop embraced the hippie culture and was seen many times while alive with a flower in her hair. She was seen many times when she was living at Winterland and Fillmore West. Sunshine Lollipop bragged about trying to hitchhike to Woodstock, but made it as far as Kansas and eventually turned back. Sunshine Lollipop is also seen around 8pm on Winter nights walking Stinson Beach where she frequented during her time on Earth.

SCALES THE FISH MONSTER:
Terrance Burkett and 3 friends were fishing off a pier in Bodega Bay and they claim they saw a humanoid type of fish in 1985. The humanoid type of fish popped completely out of the water and had tiny arms and hands, scales all over its body and an odd almost human type of face. Gina McHansen says in 1992, she saw an odd scaly fish humanoid sunning itself and when she attempted to take a picture, the creature slithered back into the water with lightning speed. Many seagulls were flying in and around where this cryptid was sighted by Gina. Gina went to the location where she saw Scales a few more times, hoping to glimpse Scales one more time, she never saw Scales again. Note: Gina is the one that called this creature by the name of Scales.

STINSON BEACH HISTORY COURTESY OF WIKIPEDIA:
Nathan H. Stinson bought land at the site in 1866. In 1870, the first road was built along the Pacific coast from Sausalito, California, and a tent settlement sprang up amongst the willow trees at the beach, which gave rise to the town’s original name, Willow Camp. The Mt. Tamalpais & Muir Woods Railway opened in 1896, making Willow Camp more accessible. Visitors could ride the train to West Point Inn and then hike or arrange a stagecoach to take them to the beach. In 1906, refugees from the San Francisco earthquake came to the area and built some of the area’s first businesses. Stinson Beach became the official town name in 1916, in honor of the largest landowners, Rose and Nathan Stinson.

Stinson Beach is the home for GDTSToo, Inc., the mail order distribution company for the Fare Thee Well Tour (Dead50), and other musical acts.

UFO REPORTS
Citizens of Bodega Bay have reported seeing yellow globes and red globes over the ocean.  On the way back home from Bodega Bay- My wife Deanna Jaxine Stinson and I, actually saw a UFO, a red globe with fire coming out of it, it was moving rapidly and this was in between Sonoma and Bodega Bay. It was at least 10,000 feet in the air, it was headed West and we were headed East. A MUFON report was submitted.

DEANNA RELATES AN ANGEL STORY:
10/12/2015. On the way back to Sacramento from Bodega Bay, Deanna told me the Saia Angel Story, because we saw 3 Saia trucks on the way to Bodega Bay. The story goes when Saia was first starting off as a trucking company, going coast-to-coast and the owner of the company came up with trucking refrigeration. Most of their deliveries were fish. Another company tried to steal the idea and the Angel Michael came to the owner and helped him win the court case. Saia for a long time had angels painted on their trucks and would hand out angel flyers to customers. Saia became a successful trucking company. This is the case of the Saia Angel.

THE BIRDS:
After filming “Shadow of A Doubt” in Santa Rosa in 1948, Alfred Hitchcock returned to Sonoma County in 1961 to find a remote coastal location for his next project “The Birds.” He chose Bodega Bay, with surrounding bleak treeless hills, quiet fishing harbor and fog. Based on a short story by Daphne DuMaurier, the original story took place in an English seashore village where murderous birds attacked the local villagers. Evan Hunter, who had written “The Blackboard Jungle” and “Last Summer” wrote the screenplay; Alfred Hitchcock financed the film from his successful television show.

Never had a director portrayed animals working in unison with intelligence. “The Birds” became the first horror/ fantasy film. Special effects, including mechanical birds, live and wild birds on strings, and optically altered film overlays of birds in flight made this a most frightening film. The fog did not always cooperate, so much of the film needed to be tinted gray. Nearly three years were required to complete work on the film for its release in 1963.

The 150 year old Potter School behind St. Theresa’s Church five miles south of Bodega Bay in Bodega, was vacant at the time of the filming. After Alfred Hitchcock’s crew repaired the exterior it was used for several scenes. Today it is a private residence and is sometimes open for tours. The school teacher’s house was a façade erected during the filming. The Catholic Church, briefly visible in the film, was made famous when it was photographed by Ansel Adams.

The Top 9 Reasons To Visit Uvita in Costa Rica

Restaurant Offers Discount to Jews & Arabs That Dine Together