Ghosts & the Supernatural – Gibson Ranch is a park in Sacramento County, CA. The first documented family owning this property was J. S. Woods, in 1860; George William Nicolaus in 1882; with Thomas MacKinnon family leasing it in 1892; Donald McDonald in 1942; Gordon Greene Guiberson in 1948; Moseley Land and Cattle Co in 1952 and Robert H. Gibson in 1955. In 1962 a portion of this property became the Gibson Ranch County Park and is still owned and operated by Sacramento County Recreation Park and Open Spaces Department. 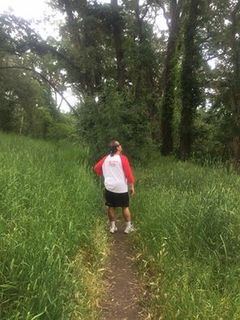 TERRENCE THE TROLL:
Miguel Mandrake of Manteca was hiking along the Gibson Ranch trail and saw a disheveled man with tattered clothes looking through the bushes. The man walked towards the road underpass where other homeless people had tents up. As he watched the man walk towards the underpass he noticed that the man’s feet were invisible. Miguel continued to watch the man and then he just faded away. Miguel realized he had just seen a ghost. As Deanna and I walked on this trail we came across shopping carts, you will see one of the shopping carts in my photo slide at the top of this page. A neighboring resident says that there was one homeless person that he knows died underneath that bridge, his name was Terrence. Terrence the Troll. Could it be Terrence the Troll that Miguel saw?

THE WET BLONDE:
Legend has it that a blonde woman back in the 80s drowned at the pond at Gibson Ranch. There have been reports that people sometimes see a blonde haired woman sitting underneath the tree holding her knees and shivering and all wet. When people approach the blonde woman, she just disappears.

When Deanna and I walked and explored the Gibson Ranch trail, we came across squirrels, black caterpillars, black butterflies, a mother skunk and her litter of baby skunks. We watched the baby skunks tumble around and then finally entering their den for rest and shelter. They were so adorable. This trail is absolutely fun to explore. When we finished our hike, we headed out and had dinner at Subway and made a fast stop at Food Source. A nice way to end Mother’s Day.

ROCKY THE RACCOON:
Tyler Derrin from Palo Alto claims that he saw a raccoon that was on a tree limb and when he went to snap a photo of the raccoon, he couldn’t see the raccoon on the view finder. When he looked away from the view finder, there was that raccoon. Tyler looks again in the view finder and the raccoon is not there. Tyler snaps a photo anyway and captures an orb on the tree limp where the raccoon was.

Let’s just call this raccoon Rocky. If this story is legit, that just proves that animals have souls and travel into the afterlife as a spirit.

Is Your Costa Rican Business Linked to the Panama Papers?