Getting Beyond Nothingness to Emptiness

It was the strangest and most beautiful sky I’ve ever seen. After witnessing three dramatic changes in weather within an hour, I stood transfixed looking back on the sycamore under which I had sat. Its white bark gleamed in the bright, setting sun, with an intensely blue-black sky as a backdrop to the east. 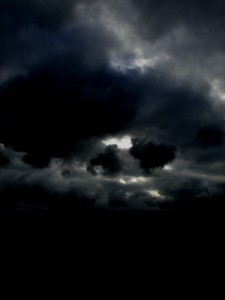 Upon reaching the stream on the outskirts of town, the wind blew hard, and rain threatened. Dark, lowering clouds swirled around one, banking against the hills and gathering into huge masses over the fields, heightening one’s senses. Do I stay, and risk rain, or worse, lightening? The risk of lightening seemed minimal, and if it started to rain, I’d just ride the bike back.

It began to drizzle, but sitting under the spreading branches of the sycamore, I saw more drops on the placid current in front of me than felt on my back from the wind coming out of the north. A few miles away, to the south and west over the canyon and foothills, rain was falling harder. There were a few clear patches to the east and north.

Suddenly hail began to fall, small pellets of precipitation that made little splashes in the stream. A seagull tacked against the wind, and a large flock of small birds scattered in the distance. Feeling protected somehow amidst all the fury and tumult, I didn’t move.

The hail, which never reached sufficient intensity or size to sting, stopped as quickly as it started. The sky to the west began to open; within a quarter hour the sun was shining again, with small, fleecy clouds above the horizon evoking a pleasant spring afternoon. To the east however, the clouds had piled into each other and taken on an ominous hue, a blue-black sheen that could not have provided a greater contrast.

I walked back and forth along the stream for some time, taking in the incredible variation of light, color and shape of the clouds and sky. One was agape–wide open and in a state of wonder. True religious feeling is a combination of awe, humility, and love in the presence of overwhelming beauty.

Religious experiencing occurs within the individual when the mind is deeply quiet. It is like death; indeed, it is a kind of death. When it happens, there’s nothing that can be said, because it begins where words and knowledge, experience and the known leave off.

But to grow in awareness and be renewed by the omnipresent actuality of death, one can’t just carry on in this dead-end

world with one’s mundane and self-centered activities, as the vast majority of people do. That way of living, so prevalent in the rich portion of the world, is unbecoming to people who don’t have to fight to put food on the table every day. Coasting and toasting preclude inward growth, and certainly the understanding and transcending of death.

Inward growth requires a non-accumulative kind of learning. And that’s where the contradiction at the heart of organized religion comes in.

The experiencing of God (without the implication of a ‘Creator’) is beyond all words, beliefs, ideas, images, knowledge, scriptures, texts, and traditions. Even one’s own prior experience of the sacred is an impediment to experiencing the benediction of the present.

Yet religions would not exist without the intermediation of text and tradition, as well as some form of priestly class. Even Buddhists have their own priests and nuns. Therefore religions impede, if not deny, the very experiencing of sacredness that they purport to support!

Awareness and contact with the sacred–that which is completely beyond thought and knowledge–can only occur within the individual. A teacher can point the way, but the moment his or her teachings become more important than one’s own solitary inquiry, one’s capacity for direct perception of the truth and the sacred is denied. 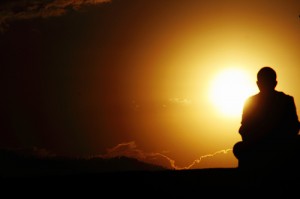 Religious feeling is not a personal thing however, but rather an inherently private and individual matter. The personal is oriented to self, revolves around ego, and is driven by will. Whereas the individual’s experiencing of God (or whatever one wants to call the essence of beauty, mystery, creation, destruction, intelligence, and love that permeates the universe), is interior and private, but not personal.

If a wordless experiencing of sacredness in the individual is what religiosity really is, then what place do the diversity of religious and cultural traditions have in the awakening of the individual and humankind?

What matters is what one puts first: scriptures, or seeing for oneself; belief, or actual experiencing; insight, or the accretions of theology.

If one opts to remain in a religious tradition, one has to hold it lightly, mining for insight while being mindful that texts and traditions are never the truth, but at best an echo of the truth. Otherwise, one is adding to the division and darkness of the world, and oneself.

Top 25 Reasons to Live or Retire in Costa Rica

Only in Costa Rica for Week of February 4th