Getting Around Costa Rica Quickly on Domestic Flights

Costa Rica Travel – When you want to see as much of Costa Rica as possible on a limited schedule then flying is a great option. 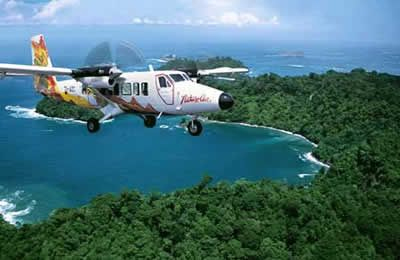 In 2016 the number of passengers who flew from one destination to another within the country exceeded 265500, an increase of 27% compared to 2015, according to data from the Directorate General of Civil Aviation (DGAC) – Civil Aviation.

Favored by the poor state of the road infrastructure, the domestic air market continues to record significant growth rates.

By car, a trip between San Jose and Liberia in Guanacaste could take up to four hours, or more, while the flight by plane from Juan Santamaría airport and the Daniel Oduber Liberia (LIR) terminal takes 30 minutes.

Nacion.com reports that “…In the case of domestic customers, Nature Air (which provided its own data) reported a 68% growth in the same period, reaching 38,000 local tourists. Sansa, its competitor, did not disclose these figures.”

Although the cost of one option over another varies according to the type of passenger or reason for the trip, flying has other advantages besides savings in time, but also in food and lodging, according to the national airlines that provide daily scheduled service from the San Jose (SJO) and Pavas (SYQ) airports to all corners of the country.

“People are flying a lot more because they realize that it is more convenient to fly, in terms of prices and costs comes the same as going by car,” Mauricio Castro, business development manager at Nature Air, told La Nacion.

According to Mario Zamora, general manager of Sansa, the increase is due to the versatility of time and costs; the good offers and the variety of itineraries.

To meet the growing demand, in the last two years both airlines made important investments in their fleet, resulting in an increased capacity in both passenger and cargo.

By the end of 2015, Nature Air says it invested US$2.5 million in four larger aircraft. In 2016, Sansa acquired two more aircraft and earlier this year, it added two new Cessna Grand Caravan 208B EX aircraft to its Costa Rican fleet, increasing its fleet from seven to nine aircraft for the airline’s domestic operation.

Rates
Rates continue to be a barrier for travelers, although companies stress that throughout the year they maintain promotions or promise good service in exchange.

For example, flying on Sansa or Nature Air from San Jose to Guanacaste can cost about US$200, round trip, in May, according to a search of the airlines’ websites.

At that same price or less, low-cost airlines such as Volaris and Wingo can take you to a Central American destination.

Major regional airlines such as Copa and Avianca have seen the trend and offer promotions to attract passengers. For example, Copa is currently offering a return trip to Managua, Nicaragua (MGA), for US$139.16, one adult, leaving San Jose May 15, returning on May 22.

According to the DGAC, Sansa is the national airline that carries the most local passengers. At the San Jose airport, Sansa has its own terminal located west of the main terminal. Nature Air is based in Pavas, at the Tobias Bolaños airport, although it does offer service to and from the San Jose airport. Nature Air passengers must board a bus that has a pickup/drop-off stop at the curb on the far east side of the departures level.

Where Are People Headed?
According to DGAC data, in 2015 (the latest figures available) 95,000 passengers flew from the Juan Santamaria airport to national destinations, some 18,000 headed for Puerto Jimenez in the southern zone and Tambor on the Nicoya Peninsula; 13,000 headed for Liberia.

Charter Flights
Traveling around Costa Rica by air is not limited to the scheduled services, a number of charter air transport companies provide service both from and to the Pavas and San Jose airports.

The service can include flights to and from ‘aerodromos’ or air fields in places like Barra de Colorado, Guapiles, Los Chiles,  San Vito, Santa Clara and Upala.

Charter flights operators in the country include Aerobell, with both fixed wing aircraft and helicopter, and Carmona Air.