Getting a Good Cup of Coffee in San Jose Costa Rica

Costa Rica – Though Costa Rica is one of the world’s top coffee-producing countries, it’s surprisingly difficult to find a good cup there. Why? Because the country exports 90% of its beans, leaving behind the lower-quality coffee for those drinking Costa Rican coffee in its homeland. The long political and economic explanation for this is a long story for another time, but what’s important is that things are changing. And one specific cup of coffee was a crucial player in this change, the movement to enjoy a good Costa Rican coffee at home. Specifically, it was a $6 cup of coffee from the La Mesa farm in Dota, Tarrazú, served at a place called Cafeoteca in 2014. 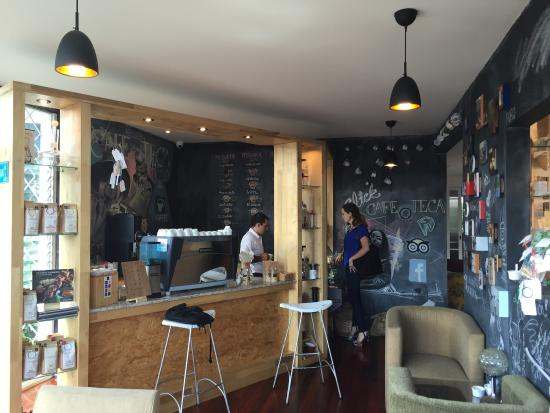 But before we get to that $6 cup, let’s take a step inside the San José cafe.

Cafeoteca has just 10 seats and is tucked in the city’s Escalante neighborhood. Its design boasts a mixture of materials that sound unusual together, but feel entirely complementary, like floor-to-ceiling windows sporting geometric metalwork, chalkboard walls, and a wood bar custom built for the space. Extra touches—like the eclectic mug collection that hangs above a chalkboard illustration of an artsy-looking woman sipping her coffee—add just the right dash of eccentricity. Cafeoteca is equal parts sophisticated and homey.

The cafe opened in 2013 as the brainchild of well-known Costa Rican chef Camille Ratton and her husband, Juan Ignacio Salom. The two had already established themselves in the food scene with their chic fusion restaurant Kalú. They also own a design boutique together. Today, all three enterprises share different corners of the same space, a renovated 1950s home built in the International Style.

“Cafeoteca was a natural step for us,” Ratton said. “It was the link between gastronomy and design to include our beloved drink.” She said they read, traveled, and drank coffee for two years to define the concept of their cafe.

Cafeoteca is deliberately small so that the baristas can offer every customer personal attention and an individualized experience. Exactly eight coffees are served—one from each of the eight regions where coffee is produced in Costa Rica. Cafeoteca buys its beans directly from the farms and roasts them weekly. Baristas grind beans for espresso on an Astoria grinder and prepare drinks using a Rancilio Epoca Semi Automatic. They use a BUNN grinder to grind beans and prepare coffee in a variety of different methods: V60, Chemex, AeroPress, syphon, chorreador (a traditional Costa Rican drip coffee technique), and cold brew. “You can try 23 different cup profiles at Cafeoteca, and have 23 experiences,” Ratton says. “Not every coffee is for everyone. It depends on the time of the day you drink it, the way you drink it, and how you prepare it.”

Ratton and Salom opened the cafe three years ago because they observed a lack of knowledge about coffee all around them. Despite their country’s worldwide reputation for amazing coffee, they found Costa Ricans did not understand why coffee purchased for $2 per pound at the supermarket could never be good. “You cannot expect to have great coffee if you do not pay proper prices to the producers,” Ratton said. “You cannot expect to drink a decent cup if you do not know how long it has been sitting on the shelf, what’s in it, or where it comes from!”

Cafeoteca wanted to change that. That $6 cup of coffee was one way they could do so.

Here’s the story behind that cup. In 2014, the La Mesa coffee farm was crowned producer of the best coffee in the country in the Costa Rica Cup of Excellence competition. When a farm wins this award, their entire crop goes up for auction the following month. Usually, international buyers swoop up all the beans for a hefty price. For the first time, a Costa Rican roaster purchased a small batch of winning beans. The roaster was Café Boleto, one of Cafeoteca’s two roasters. The cafe sold single servings of La Mesa’s coffee for 3,000 Costa Rican colones (about $6).

Zach Dyer reported in the Tico Times why this particular cup of java was so important. “Historically, Costa Rica exported its best coffee and drank the worst,” he told me when I asked him about the country’s evolving coffee culture. “One of the biggest struggles with the nascent Third Wave coffee movement here is getting access to high-quality beans to serve in cafes. Many producers don’t think about reserving some of their harvest to sell at a lower price for domestic consumption, so the cafes have to start doing a lot more in the way of relationship building at the source.”

Which is exactly what Cafeoteca has been doing from the start. For specialty coffee to catch on in Costa Rica, local cafes need to get their hands on domestic beans, then make a serious effort to educate their customers on the how and why behind every cup. As the movement towards appreciating local quality grows, Cafeoteca leads the way by delicious example.

Sex As a Job Skill Needed For Employment in Costa Rica

3 Ways to Be Instantly More Productive