Getting a Fake Drivers License in Costa Rica

Costa Rica News – The Directorate of Driver Education has reported that there have been at least 10 cases this year of drivers being caught with fake licenses. 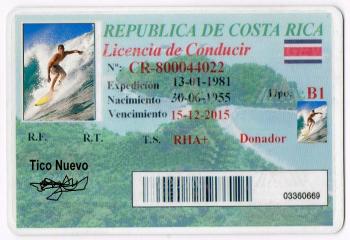 In some cases the users did not know it was an altered document, but this stresses the need to get a license in the traditional way.

Taking shortcuts to avoid driving classes, tests and paperwork almost guarantees that the document you end up with will be a fake. People are paying 300,000 colones for these documents, according to the websites that offer them.

Cops can easily tell if a document is real or fake because there are usually tone irregularities in the fake ones. Often times they are also missing other security parameters.

The official licenses will eventually be changed to a new material that is harder to counterfeit.

Until then, those in charge stress the fact that giving a license to someone who hasn’t passed a road test can cause accidents and the fact that those who buy or sell fake licenses are punishable by up to two years without being able to get a license.

With Shark Finning Being So Profitable; Costa Rica No Longer Keen on Shark Protection