World News – Well for all of us that thought the entrance to hell was actually the Hotel Cocal  Casino in Jaco, we might have been off by a few thousand miles.  However, on a Saturday or Friday night it sure does seem close. Archaeologists digging in Turkey have found the guardians of the “Gate to Hell” — two unique marble statues which once warned of a deadly cave in the ancient Phrygian city of Hierapolis, near Pamukkale. 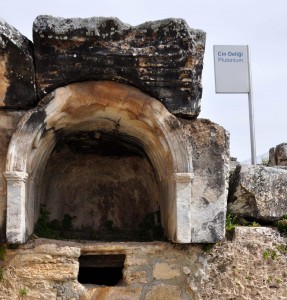 Known as Pluto’s Gate — Ploutonion in Greek, Plutonium in Latin — the cave was celebrated as the portal to the underworld in Greco-Roman mythology and tradition. It was discovered in March by a team led by Francesco D’Andria, professor of classic archaeology at the University of Salento.

“The statues represent two mythological creatures,” D’Andria told Discovery News. “One depicts a snake, a clear symbol of the underworld, the other shows Kerberos, or Cerberus, the three-headed watchdog of hell in the Greek mythology.”

Rolled onto itself, the snake looks threateningly toward anybody trying to approach it, while the 4-foot-tall Kerberos resembles the Kangal, the Anatolian shepherd dog.

The sculptures were found as archaeologists further excavated the area where in March they unearthed the remains of the Plutonium, which included an inscription dedicated to the deities of the underworld — Pluto and Kore.

The dig revealed the source of the thermal springs, which produce the famous white travertine terraces.

Believed to have healing properties, the hot springs made the Roman city of Hierapolis — now a World Heritage Site — a popular destination for pilgrimages.

Both marble statues emerged from the thermal water, leaving little doubt that the site was indeed Pluto’s Gate. The cave was described in historic sources as filled with lethal mephitic vapors.

“This space is full of a vapor so misty and dense that one can scarcely see the ground. Any animal that passes inside meets instant death,” the Greek geographer Strabo (64-63 B.C. to about 24 A.D.) wrote about the site.

“I threw in sparrows and they immediately breathed their last and fell,” he added.

“They were instantly killed by the carbon dioxide fumes,” D’Andria said.

Strabo’s account was confirmed during the excavation, as D’Andria and colleagues found several dead birds and insects near the opening.

In the previous excavation, the archaeologists also found the remains of a temple, a pool and a series of steps placed above the cave — all matching the descriptions of the site in ancient sources.

The site represented an important destination for pilgrims. People watched the sacred rites from steps above the cave opening, while priests sacrificed bulls to Pluto. The ceremony included leading the animals into the cave, and dragging them out dead.

Only the eunuchs of Cybele, an ancient fertility goddess, were able to enter the hell gate without any apparent damage.

“They hold their breath as much as they can,” Strabo wrote, adding that their immunity could have been due to their “menomation,” “divine providence” or “certain physical powers that are antidotes against the vapor.”

According to D’Andria, the site was a famous destination for rites of incubation. Pilgrims took the waters in the pool near the temple, slept not too far from the cave and received visions and prophecies, in a sort of oracle of Delphi effect. Indeed, the fumes coming from the depths of Hierapolis’ phreatic groundwater produced hallucinations.

The popularity of the site is testified by dozens of lamps unearthed in front of the cave opening. Among the most precious objects, the archaeologists also found a marble head representing the goddess Aphrodite.

“These votive offerings shows the relentless vitality of the pagan cults in Hierapolis between the 4th and 6th centuries A.D., when the Roman empire was progressively Christianized by emperors such as Constantine and up to Justinian,” Alister Filippini, a researcher in Roman history at the Universities of Palermo, Italy, and Cologne, Germany, told Discovery News.

It is possible that during the 5th century the Plutonium’s entrance was blocked, preventing access to the underground cave, so that the related pagan rites could not be performed. However pilgrims continued to venerate the area by leaving offerings to the deities, who were believed to miraculously heal the sick people taking the thermal waters near the Plutonium.

At the same time, between the 4th and 6th centuries, the statues of Kerberos and the snakes were scarred, most likely by Christian pilgrims.

“These details show the growing conflict between the new and old cults, and the resulting marginalization of the traditional pagan religion,” Filippini said.

During the 5th century A.D. pilgrims came to Hierapolis from remote locations to venerate the tomb of Saint Philip, one of the 12 apostles of Jesus Christ, whose remains were found by D’Andria two years ago.

Finally, in the 6th century A.D., the site was obliterated by the Christians who covered it with soil.

“Geological investigations have already started in collaboration with the University of Pamukkale to begin the restoration of this unique site. We hope we can open it to the public in a near future,” D’Andria said.