Sports Gambling News – Well as an avid Texans fan I had to get one of my writers to do a little piece about the game tonight as the Houston Texans visit the New England Patriots. Although I do not like his pick I am a bit worried about the Texans passing defense over the past few weeks and New England’s offense is very high powered. 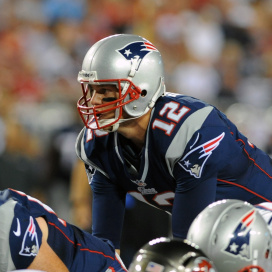 Take a quick glance at the tale of the tape for Monday night’s showdown between the Houston Texans and New England Patriots.

New England tops the league in scoring at 35.8 points (more than six better than runner-up Houston) but had its second-lowest offensive output in last week’s 23-16 win at Miami. Tom Brady was sacked four times and threw only his fourth interception. The Patriots will be without the services of Rob Gronkowski (forearm) but have Aaron Hernandez, who caught eight passes for 97 yards last week versus the Fish, to fill in.

The Texans are without CB Brice McCain, their best slot defender, due to a broken foot and could march out top corner Johnathan Joseph at less than 100 percent. Joseph missed the last two games due to a tender hamstring and won’t get 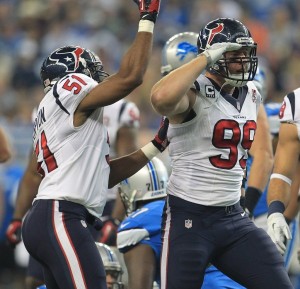 any favors from the cold and wet conditions expected to hit Gillette Stadium Monday night. Despite a beat up secondary, Houston has one of the toughest defenses in the league against the run and boasts pass-rush threat J.J. Watt.

New England’s secondary was vulnerable to big plays early in the season and has allowed the fourth most yards passing in the NFL. But it has improved since Devin McCourty moved from cornerback to safety for the past six games and Aqib Talib was acquired from the Tampa Bay Buccaneers.

Rookie returner Keshawn Martin, who inherited duties on both kickoffs and punts after the Texans released Trindon Holliday after Week 5, is fourth in the league in punt-return average at 14.3 yards, and 21st in kickoff returns (24.1).

The Patriots special teams will suffer without Julian Edelman, who will be sidelined with a season-ending foot injury. Edelman split time as the third receiver this year and was a terror on special teams. He had 21 receptions, three touchdowns and also a 68-yard punt return for a touchdown. The loss of Edelman could mean a heavier workload for Wes Welker as a punt returner. Welker filled in for three weeks earlier this season when Edelman missed time with a hand injury.

With these stats I make my pick:

If you are looking for a place to wager during bowl season, NFL playoffs, NBA, or anything else  the banner below and you will get 10% back on either your winnings or your losses each week.

Why not get in the game for Bowl Season and continue right through NFL playoffs and March Madness?

Only in Costa Rica for Week of Dec 10th