Costa Rica News – For the first time in Costa Rica, judicial authorities sanctioned  a man charged with acts against animal welfare, specifically for dog fighting. Humane Society International, which worked with the National Animal Health Service (SENASA) to move forward with the prosecution, applauded the first-ever sanction of its type. 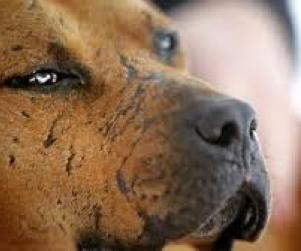 The case goes back to a complaint filed in December 2012 stating that the suspect promoted dog fights in the suburban community of Desamparados. Following due process, SENASA requested a search warrant to collect evidence to support a criminal case of animal cruelty on the premises, ultimately leading to the felon being taken to court. The offender acknowledged the charges, which resulted in a sanction of 105.000 colones (roughly US $200) fine. Additionally, the offender must refrain from engaging in any action that conflicts with animal welfare, be it physical injury, fighting or neglect. Any violation of said dispositions would lead the reopening of the legal process and an even greater sanction.

“This ruling and its associated penalty represent a major legal precedent, not to mention the fact that it will also have a considerable public impact, warning dog fight promoters of the legal consequences of animal abuse,” said Allan Sánchez, director of the Central Metropolitan Region of SENASA.

The joint efforts of HSI/Latin America, SENASA and local organizations such as American Stafford Costa Rica, have led to the discovery of many illegal breeding operations. Canines of various breeds, and frequently of specific bloodlines, are bred to be sold to dog fighting rings. Dogs are often subjected to cramped and unhygienic living conditions, with little to no attention to their most basic needs.

Cynthia Dent, regional director of HSI/Latin America, said: “We commend the Costa Rican authorities for their great effort and excellent work in the struggle against dog fights. We are pleased to witness the real, efficient and tangible results of the trainings we’ve given to help authorities fight this shameful industry. Today we’d like to reiterate our pledge to continue supporting SENASA and the local animal welfare organizations to confront these crimes.”

Humane Society International and its partner organizations together constitute the world’s largest animal protection organization. For more than 20 years, HSI has been working for the protection of all animals through the use of science, advocacy, education and hands on programs. Based in San Jose, Costa Rica, HSI/Latin America is active in programs related to companion animals, wildlife and farm animal welfare. Celebrating animals and confronting cruelty worldwide – on the Web at hsi.org