Father Drowns Trying to Save Son in Costa Rica

Costa Rica News – Stephen Corrales, 34, drowned in Puntarenas trying to save his 12 year old son, who was still missing last night.  The incident occurred at 3:30 pm yesterday, 200 meters east of the pier located near the Paseo de los Turistas. 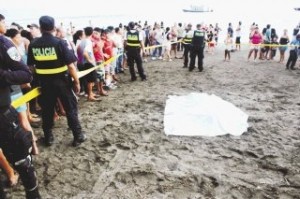 Witnesses said two children of Corrales were swimming in the sea when they began to have trouble getting back to the beach.

“I ran with Mr. (Corrales) when I realized what was happening. I took the youngest child, I estimate about 8 or 10 years. Then I lost sight of the father and the other child, “said Mata.

A few minutes later, and cruzrojistas Guard brought the body of Corrales which was against the Captain Moreno nightclub.

The 12 year old son, identified with the surnames Corrales Chaves, until press time remained missing. However, authorities continued to search for the child.

Meanwhile, the body of Corrales was taken by the Judicial Investigation Organization (OIJ).

Ronald Vega, cruzrojista in Puntarenas, was surprised by what happened.

“they were surprised by a  rip current and panicked. In such cases, it is best to try to remain calm, otherwise, the person is tired, “said Vega, who insisted that” Puntarenas is a very quiet beach. “

Only in Costa Rica for Week of Sept 10th

Sweden Aims to be Cashless Society