False Exorcists in CR Arrested for Sexual Abuse of 4 Women

Ok Costa Ricans it is time to stop believing the lies and false impressions that you have grown up believing.  Just because someone carries a cross or poses as a person representing the church does not mean you trust them.  Some of the biggest hypocrites do so in the name of God.  Two men posing as exorcists were arrested for sexually abusing four women, one child. 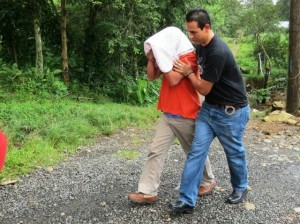 The capture occurred yesterday around 10 am, in the area of Aguas Zarcas, in San Carlos, Alajuela.

Those arrested were identified with the surname Salazar, 63 years old, and Lara, 80.

The subjects told their victims that they were members of the association of the Holy Spirit works, social welfare organization of Catholic origin, founded by Father Valverde Sergio Espinoza, who is in charge of assisting people who were in a position of vulnerability, exclusion and extreme poverty.

The suspects were presented in the homes of women and sessions conducted “spiritual.”

According to authorities, the subjects did not charge for their services, but demanded in return for breakfast and lunch.

The two men talked to their victims, prayed for them and they read the Bible. Then said they had found in them an evil in her private parts, so they ordered them to undress have a follow exorcism.

Lara Salazar and used in ritual incense and oils and essences applied in the private parts of women, sexually abusing them.

The Judicial Investigation Organization (OIJ) in the last month received four complaints of women who claimed they were victims of abuse from the detainees now.

The authorities seized the subjects were two crucifixes, four beads, two Bibles and 12 bottles of oil.

The authorities believe the suspects were operating on multiple sites in the north, including San Carlos, Los Chiles, Zarcero and Guatuso.

The subjects were taken yesterday afternoon at the Office of San Carlos to be investigated.

The OIJ called on citizens to, if they know of any case or were victims of these individuals, the complaint interposed in their offices.

Well, I hear Jesus forgives everyone. This one might have pissed him off pretty good though.