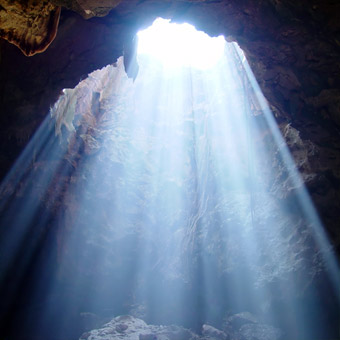 FACTS ABOUT MOANING CAVERNS:
Moaning Cavern is a solutional cave located in the Calaveras County, California, near Vallecito, California in the heart of the state’s Gold Country. It is developed in marble of the Calaveras Formation. It was discovered in modern times by gold miners in 1851, but it has long been known as an interesting geological feature by prehistoric peoples.

Moaning Caverns gets its name from the moaning sound that echoed out of the cave luring people to the entrance, however expansion of the opening to allow access for the public disrupted the sounds. The portion of the cave developed for tourists consists of a spacious vertical shaft 165 feet tall, which is descended by a combination of stairs and a unique 100-foot-high (30 m) spiral staircase built in the early 1900s. It is open to the public for walking tours, rappelling, and spelunking. Including the off-trail areas, the cave reaches a depth of 410 feet (124 m).

Moaning Cavern is also an archaeological site, where some of the oldest human remains known in America were discovered. According to archaeologist Phil C. Orr, these human deposits were about 12,000 years old, for they were under 420 mm. of speleothem mineral deposits. Nevertheless, there are also many other human bones in these caves, some of them from the more recent periods.

There was a lot of controversy about these and other remains in the caves. For example, the Calaveras Skull, found in the same area was deemed to be a hoax.

Besides a saber-tooth that faced its demise at this cave, the cave has long been the resting spot for the bodies of prehistoric people who fell into its gaping opening.

The Main Chamber
Moaning Cavern is home of the largest single cave chamber in California. The massive room reaches over 180 feet before funneling into smaller passageways. With a 20 30 foot thick ceiling, the open area inside the chamber is, in fact, tall enough to hold the Statue of Liberty (pedestal excluded). There is only one natural entrance into the chamber in the form of a 30-foot vertical chimney dropping into the center of the room. This does make commercial entry a little difficult so dynamite was used in the mid 1800s to expand a natural crack in the ground wide enough for stairs to be built down. The narrow wooden staircase ends at a flat platform 65 feet underground. From there, a ten story spiral staircase leads down to a second platform at the base of the chamber.

EZRA ALLEN MINER AKA BILL MINER AKA THE GREY FOX – AKA THE GENTLEMAN BANDIT
Special Note: The Grey Fox after robbing a stage coach with his gentleman politeness, took his stolen property to Moaning Caverns and hid it between some rocks. When returning to the spot one week later, the Grey Fox was unable to 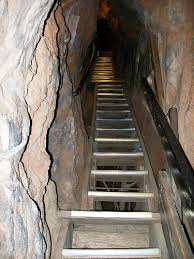 find his stolen loot. Majorie Layman who rappelled down Moaning Caverns witnessed a man in 1800s garb searching through the weeds, shrubbery and rocks looking for something. The man wearing a grey cowboy hat and a grey jacket looked at her and then faded away. Marjorie will never forget that experience and she would never forget the face on this ghost. 8 years later while she was in an antique shop, she came upon a photo and to her surprise it was the ghost that she saw at Moaning Caverns. Marjorie actually screamed in this antique shop when looking at the photo. The antique shop owner walked over to her and asked what happened? Marjorie demanded to know who it was in that photo and the owner said: “That is an original photo of The Grey Fox, also known as Bill Miner, an outlaw of California who was originally from Bowling Green, Kentucky. If you want the photo, it will cost you $35.00, because Bill Miner was a California legend.” Marjorie actually did purchase the photo and proudly displays it in her home, she knows in her heart that she did indeed encounter The Grey Fox at Moaning Caverns.”

Special Note: My wife Deanna Jaxine Stinson used to explore the uncharted caves of Sonora with locals and always felt the caves in this area were mystical and could feel the ghosts that haunt these caves. Deanna has also explored Mercer Caverns, California Caverns. It is noted that Samuel Langhorne Clemens aka Mark Twain received a lot of his inspiration for his story about Tom Sawyer from Mercer Caverns, California Caverns and Moaning Caverns.

So as you can see Moaning Caverns is very haunted. Calaveras County and the caverns were engulfed with death and when I hear ghost hunting groups tell me that they have all this ghost hunting equipment and no where to go, I stand there flabbergasted, because California is filled with history and is inundated with ghostly hauntings.