Ghost & the Supernatural – Alcatraz is packed with history. I once visited this National Historic Landmark back in 1994. Took a ferry boat to the island and enjoyed the tour. The tour explained that Juan Manuel de Ayala in 1775 discovered Alcatraz and called it the Island of the Pelicans. Learned that Alcatraz was once a military prison and then it changed over to a Federal prison from 1933 to 1963. In 1969, for 19 months it was occupied by Native American Indians that had a dispute with our government. In 1946, many prisoners tried to escape and many prisoners died as a result. This was called the Battle of Alcatraz. Some of your notables were: Al ‘Scarface’ Capone; Robert Franklin Stroud aka The Birdman of Alcatraz; George ‘Machine Gun’ Kelly; Bumpy Johnson; Rafael Cancel Miranda; Mickey Cohen; Arthur R. ‘Doc’ Barker; James ‘Whitey’ Bulger; Alvin ‘Creepy’ Karpis. 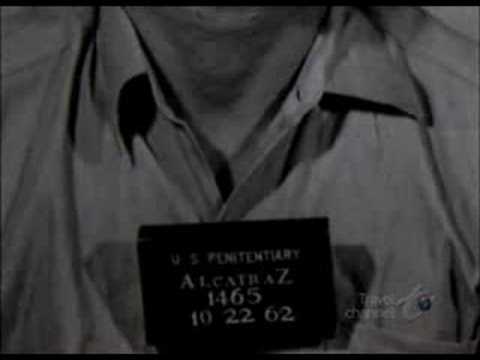 In 1962, Frank Morris, John Anglin and Clarence Anglin made history by escaping off the island.

MY OWN EXPERIENCE:
When I visited Alcatraz, I felt a sharp pain to my left side as if I was being shanked. It lasted for a few seconds and as I looked into Al Capone’s cell, I felt an extreme cold spot. I believe Alcatraz is one of the most haunted prisons in America. There was so much tragedy, suicides, murders, rioting, rapes and altercations in this institution. With this much violent history, the atmosphere is filled with negativity. Negativity that will never go away.

Author E. Floyd makes claim that almost every guard and official experienced the paranormal in Alcatraz. The paranormal activity continued after Attorney General Robert Kennedy shut the facility down in the 1960s. Park Rangers have witnessed the paranormal and tell their stories. There are supernatural stories of ghostly Native American prisoners and phantom officials who died on Alcatraz during the time of the Civil War haunting the island.

Some of the paranormal activity are:

Tourists, park rangers hear whispering sounds in the middle of the night.

Clanking of chains are heard coming out of unoccupied cells.

The Red-Eyed Monster of D-Block
When the prison was a functioning institution an inmate in D-block saw an entity with glowing red eyes. The red eyes would stand out in the darkness of his cell and just stare at him. The prisoner screamed for hours. He was found dead the following morning with a purple face, bulging eyes, and unidentified strangle marks around his throat.

Guards in C-Block would laugh at the inmates who made claims of paranormal activity in their cells. The guards stopped laughing when they started experiencing the paranormal for themselves. They would experience cold spots, fingers running up and down their head, neck and spine. They would hear ghostly crying in the night and when they went to investigate, there was no one there. A Hispanic man that has many tattoos, including a tattoo of Jesus on the cross covering his whole bare back is seen in the courtyard. A guard witnessed this apparition that was staring back at him, it was a hard stare and when the guard approached the tattooed man, he vanished. GHOST IDENTIFIED: TATTOOED PRISONER

Prisoners reported seeing prisoners wearing 19th century garb walking the corridors in A-Block and when the guards walked near them, they would simply vanish. A staff member saw a gang of Native American prisoners walking in a circle, then vanish.

SPIKED SEA SERPENT SWIMMING NEAR ALCATRAZ:
The Alcatraz Serpent was seen by guards in 1957 swimming near Alcatraz. Larry (a former guard) claims that the serpent had spikes running down it’s neck and spine and it was a brownish color, 25 feet in length and the width was perhaps 15 inches. Serpent was traveling at 15 knots.

The Warden’s house is supposed to be haunted. Items in the house move around. A woman in 1800s garb with blonde hair is sometimes seen.
GHOST IDENTIFIED: THE WARDEN’S HOUSE BLONDE 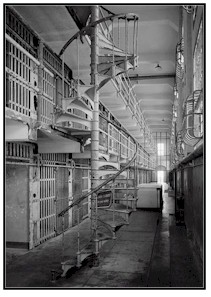 GHOST WITH MUTTON-CHOPPED SIDEBURNS:
Many guards have seen a male ghost with mutton-chopped sideburns wearing a gray suit and brimmed cap. This ghost will leave a room ice cold and is known to extinguish the fire in the Ben Franklin stove.

THE SPECTER OF JOHNNY HAUS:
A big Texan inmate is sometimes seen walking the hallway. He is mostly seen at the Michigan Avenue corridor. Former inmate Leon ‘Whitey’ Thompson identified this specter as the big Texan known as Johnny Haus. Leon even saw the specter and chased it down the hallway and as the specter went around the corner, he was just gone. A staff member saw the big Texan walking towards him, he just stood there and the specter of Johnny Haus walked right through him and continued walking down the hallway. The staff member had goosebumps all over his body and was petrified with fear.

SPIRIT OF ABIE MALDOWITZ AKA THE BUTCHER: C-BLOCK
In A-Block, C-Block and D-Block, you can hear unexplained clanging sounds, screams, crying, unexplained footsteps, moaning. C-Block’s resident ghost is Abie Maldowitz aka The Butcher. Abie was murdered in the laundry room. A Park Ranger feels like he may have come into contact with Abie, when he witnessed a heavy door swinging back and forth in C-Block. The swinging door has continued on many other nights. Cells 11, 12 and 13 disembodied voices seem to resonate from these cells. The Hole of course is very haunted, probably the most haunted cell in the whole prison. Cell 14-D is permanently icy cold, even during the Summer.