Well if you a District Attorney and you are evicted from your office for not paying rent you can either pack up and go quietly or do what this guy did which is pretty much the other end of the spectrum.  So ridiculous it is laughable. 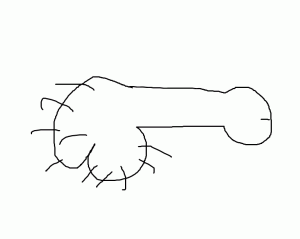 A state district judge ordered disbarred Dallas attorney Tom Corea back in jail this morning because he allegedly trashed his Design District office and drew penises all over the walls after being evicted last month.

Corea was charged earlier this year with four felonies alleging he stole from his clients. He was arrested, posted bond and was released.

Weeks later, he was evicted for not paying rent for his upscale office in the 2000 block of Farrington Street near Interstate 35E and Market Center Boulevard, according to testimony before state District Judge Mike Snipes. Corea was ordered out by Oct. 31.

When the president of the real estate company that represents the building, Doug Molny, showed up the next day to check out the property, he found “complete destruction,” including “penis graffiti on every single wall throughout the building,” Molny said.

Written next to some of the penises was the name Doug. Molny said it appeared someone took a sledgehammer to granite counters. Doors, light fixtures, cabinets and appliances were destroyed or removed.

There was feces and urine on the floor, Molny said.

Prosecutor Jacob Harris presented photos of some of the damage, including a derogatory message directed at an Arizona judge who found him in contempt of court in an unrelated case. The message included the judge’s name and a phone number with a 505 area code.

Corea, who did not testify, was wearing a dark suit and sitting next to attorney John Gussio. At one point while Molny was testifying, Snipes ordered Corea to “refrain from making faces at the witness.”

Gussio called Corea’s girlfriend, who is also a Corea employee, to testify. But her testimony was cut off after prosecutors said they believe her to be an accomplice and that she ought to have an attorney with her.

“He destroyed that building,” Harris said in asking Snipes to find Corea’s bond insufficient. The cost of the damages is thought to exceed $100,000, according to testimony.

“I doubt seriously there are any random vagrants in the Dallas area that are familiar with area code 505,” Snipes said in setting his new bond to $500,000 in each of the four felony cases. The judge told Gussio he would be willing to reconsider the ruling when the attorney is better prepared.

What is the Meaning of Life?

Costa Rica Conavi Director: ‘I Hope to God that all Measures Work’ To Fix Bridge