World News – The Chaparrastique volcano in eastern El Salvador belched a column of hot ash high into the air on Sunday, frightening nearby residents and prompting authorities to order evacuations in the area. 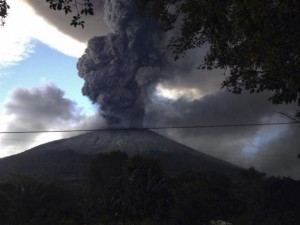 There were no immediate reports of injuries in the San Miguel region, where the volcano is located and that is known for its coffee plantations.

Civil protection authorities said they would evacuate people from within 1.9 miles of the volcano and set up emergency shelters.

“The evacuations began almost right after the explosion,” said civil protection official Armando Vividor. He said some 5,000 people lived around the volcano.

The volcano, which is about 86 miles to the east of the capital, spewed ash over a wide area and the smell of sulfur hung over surrounding towns, according to reports on social media. Authorities recommended breathing through moist handkerchiefs.

Santos Osorio, a member of a local coffee growers union, said heavy ash was falling in the area and local coffee plantations would be checked for damage.

El Salvador’s crop has already been blighted by an outbreak of leaf rust that has reduced output in all five of Central America’s coffee producers.

El Salvador has 23 active volcanoes and the Chaparrastique volcano is considered one of the most active, with 26 eruptions in the last 500 years, the environment ministry said. In a 1976 eruption, lava gushed from the volcano and it shook violently in another event in 2010.

Only in Costa Rica for Week of December 30th