Brussels, Belgium –  The euro area has to “work harder” to stimulate growth, urged the head of the IMF, a day before an EU summit to discuss measures to lift the continent out of a crisis that, according to the OECD, threatens the global economic recovery. 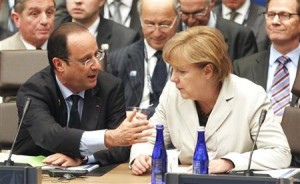 The summit was greeted with optimism from the markets, with strong gains in the stock, despite disagreements about the possibility of issuing Eurobonds, supported by France but rejected by Germany.

The possibility of  Greece leaving the EU and of Spain asking for help to recapitalize its banks, revolutionized the European agenda and both issues are being thought about in the minds of the 27 heads of State and Governments of the  European Union (EU).

The summit was initially dedicated to guide the focus of government policies on growth, not only to the adjustments to balance the public accounts, which many economists are aggravating the recession.

The Organization for Economic Cooperation and Development (OECD, based in Paris), warned that the crisis in the euro area (formed by 17 of the 27 EU countries) “worsened recently and still represents the main source of risk for the world economy. ”

“There is an increased risk of vicious circle between the rising cost of sovereign debt, weak banking systems, the excess of fiscal consolidation and low growth,” warned the chief economist at the OECD, Pier Carlo Padoan.

The solvency of Spanish banks became one of the biggest headaches of European leaders and the Prime Minister of Spain, Mariano Rajoy, should try to dispel those doubts at a dinner today.

Spanish banks lent massive amounts of money before the property bubble burst in 2008 and now loaded with 184,000 million in dubious loans repayment, as well as buildings and land confiscated in a devalued market. In total, 60% of your portfolio.

The outlook for Spain “remains poor and is at risk of worsening,” said the OECD.

European leaders will discuss measures such as issuing Eurobonds, led by French President François Hollande , who will debut at a summit of the EU. But Germany, the eurozone’s largest economy and largest European contributor, rejected the project.

A German source said: “It is not a new issue, we believe it is the wrong way” when referring to that instrument of debt financing.