Costa Rica News – As I said  before and will continue to repeat, once you get a government job in Costa Rica it is next to impossible to be fired.  There is absolutely no accountability for their actions and corruption is breeding corruption. 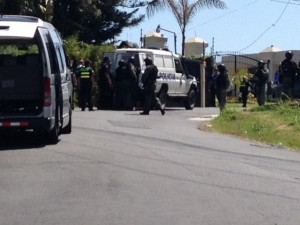 I have seen teachers miss a week of classes because they wanted to take a vacation or did not feel like going that week.  They come back to no punishment and any old false doctors note will suffice.  Even though the children’s education is what is getting hurt in this situation, it seems to not matter to the educators.

I have seen police openly take bribes and get a slap on the wrist 3 month paid suspension instead of getting fired.

I have seen government official after government official get away with unethical and even criminal behavior, because there is no punishment for their actions.  It is no surprise that having a system where being reprimanded for acting wrong and breaking the law is almost unheard of. But when you have an inefficient legal system where the criminals know how to work the system to get away with these actions, you cannot expect much more.

These house being robbed by a cop shows how far they are willing to try to go.

One of the five assailants who entered to rob a house in Bello Horizonte de Escazú Wednesday morning was a police officer from that municipality.

As explained by the agents of the Judicial Investigation Organization (OIJ), the man had been on leave without pay in the City of San Jose and even left the country during this leave from work.

The alleged thief was hiding in one of the courtyards of the robbed house.

The man carried a black glove on his left hand and apparently the other glove was inside the house according to the OIJ said.

I guess he will not get the “if it does not fit you must acquit” defense when it comes to trial in 8 months.

Suspension For Making Gun Out Of Legos?

What Are the Jobs for Expats in Costa Rica?

Here the law makers make these laws and then it has no teeth. I think they make it this way to protect them from their misdeeds.

This cop who was caught robbing. Was told by a maid or gardener or he saw for himself the goods and how he could steal. Be careful who you invite into your home. Maids talk about the gringo being pinche and he has sooo much. Flat screen TV’s and computers, stereo’s. and so on. Then her friends hear this and get ideas. The cop just like the bank manager who robbed $750,000 and kept the money will soon be back on the job or on disability rest of their lives. Another joke here in Ticolandia.. We need higher and more taxes to support the, WOW!