“The new Tulum” is a phrase that’s thrown around a lot. Santa Teresa, Costa Rica, is one recipient of this title, but it’s no knockoff of Mexico’s famous and favorite hippie-chic resort town. In fact there’s not much the two have in common besides a proliferation of yogis and palm trees. 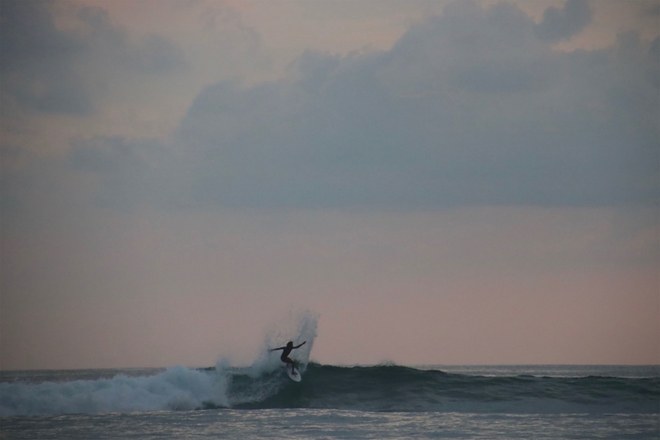 For one, Tulum can’t compete with the Nicoya Peninsula surf town on Costa Rica’s Pacific coast when it comes to a title it already holds, indisputably, as one of the world’s five Blue Zones. These are anthropologically defined places (including Okinawa, Japan, and Ikaria, Greece) where the lifestyle and environment leads to people living the longest. It’s not hard to understand why that’s true in this rustic-bordering-on-primal place, where fresh fruit grows in abundance, fishing is significant to the way of life, and the day-to-day seems to center around nature, whether it’s mountains, waterfalls, or the ocean. Even expats—and there are many—drawn from around the world to live here, embody this concept. Toned and tanned (and generally health-conscious) to the max.

Make no mistake: It is wild in Santa Teresa. But that’s part of the appeal—and reason to visit sooner rather than later, since as coastal Costa Rican towns tend to go (Tamarindo), it might be an entirely different story in a few years, once efforts to bring water and other infrastructure are completed. For now, rugged ATVs are the preferred mode of transportation for travelers on the potholed roads (filled with wandering crabs by night, watch out!), and some kind of scarf-and-oversize-shades combination to keep the dust off your face is highly recommended. That’s about as glamorous as you’ll get. Even the most luxe resorts—like the intimate and Edenic beachfront Florblanca—embrace the outdoors in a way that means you may very well spot monkeys, iguanas, pygmy owls, and other vocal critters from the comfort of the crocheted hammock on your private patio encircled with verdant jungle. Or even from your oversize bathtub.

But as gorgeous as the rainforest is—and a hike to waterfalls in nearby Montezuma or horseback ride through the heights just before sunset are prime ways of experiencing it—the beach is the real natural draw. They’re wide, sandy, and palm-fringed, and if you know where to look (locals are friendly and will happily point you in the right direction) there are tidal pools for snorkeling and swimming in the warm water. Standup paddle-boarding excursions can take you into mangrove-lined rivers. But, really, it’s all about the surf. In a country renowned for its waves, it stands out from the many surf towns dotting its coast thanks to acclaimed points and more challenging breaks like La Lora, alongside forgiving beginner-appropriate ones.

Yoga is another significant draw to the area. Florblanca is home to a shala—guarded by Ganesha—close enough to hear breaking waves as yoginis 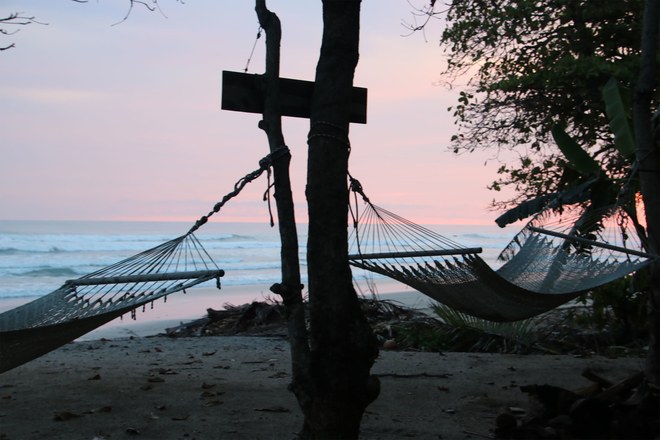 practice their asanas in creative, sweat-assured classes that can stretch to 2 hours. The resort is also a must for a dreamy local coconut scrub and massage at its Spa Bambu, and while the shopping scene in Santa Teresa has not yet hit Tulum heights, the hotel’s boutique has a selection of Tori Praver and Marysia swimwear with Costa Rican–made embellished Panama hats and local botanical skincare. Pranamar is another yoga hub, where the beautiful open-sided studios (the two-tier pool is on one side, thick emerald palms and birds of paradise on the other) host daily classes that attract not just regular practitioners and those on retreat, but also surfers and locals representing a stunning array of countries. Even kundalini devotees can get their fill, at Nautilus’s treetop space.

The same attractive multicultural vibe is evident in the restaurants that line the one main road, from Mal Pais to Playa Hermosa. A Canadian artist who arrived more than a decade ago for surfing and Spanish-language immersion owns a popular stop, Zwart Art Cafe, for vegan bowls, pre-surf power smoothies and post-sesh burritos. Israeli expats run Zula Restaurant (when they’re not back in Israel during low season in May and June), where they make crave-worthy hummus and falafel. Mouthwatering metacentric Argentinean fare—typically served by gorgeous, laid-back Argentines—is in great supply at El Facon and Casa del Mar Steakhouse. There’s Japanese fusion, Spanish tapas, and Italian. Tacos are found at Osa; pizza night at the French breakfast hot spot The Bakery is a can’t miss, and Product C is the place for local craft beers, superior super-fresh fish (in the form of addictive tacos, ceviche, and surfer bowls), and cool, friendly, tatted staff.

Sunsets are a major event; they’re that consistently spectacular. The light show is best viewed from the beach at Florblanca, sipping a piña colada through a bamboo straw (watch them chop open the pineapple and pour the contents of a pipa fría into the blender for proof it’s the real deal) or with an Imperial at Playa Hermosa’s rolling foam, where it’s pure magic watching silhouetted surfers ride the waves as the big sky turns to tie-dye behind them.