Enjoying the Exotic Fruits of Costa

Costa Rica Living – Exploring the local markets is hands-down one of our favorite things to do when we travel. Not only are they inexpensive venues to pick up delicious grub, but also typically they offer a fascinating inside look at the culture and traditions of a region.

The markets in Costa Rica are certainly no exception. Colorful, vibrant and overflowing with unrecognizable produce, we’ve discovered countless new fruits and vegetables simply by spending some time with the friendly local market vendors.

Costa Rica is a lush and tropical country, so it’s common to find well-known fruits like papaya, pineapple, coconuts and bananas at just about any fruit stand around. But there is much more to the fruit you’ll find in Costa Rica. Here are nine of our favorite fruits in Costa Rica that are guaranteed to have you dreaming about the tropics long after you’ve returned home:

Sometimes referred to as soursop, Guanabanas are large, green and spiky fruits with a soft, white flesh inside. Eat the meat as-is, or blend it into a delicious smoothie. We recommend mixing pineapple and guanabana for a mock pina colada that’s simply to-die-for.

This tangy fruit is common throughout the tropics, particularly as a flavoring for drinks and desserts. The dry brown pods hold delicious pulp and seeds. You won’t want to eat the seeds, so it’s common first to boil the pulp in boiling water to remove the fruit. The, it can be savored in a variety of local dishes and drinks! We recommend Tamarind Margaritas when available.

Also known as a Spanish Lime, the mamoncillo is a mouth-watering green fruit. Cut it open to reveal a gelatinous pulp similar to that of a lychee. The fruit surrounds a giant seed, so it’s best enjoyed by sucking the fruit and then spitting out the seed.

It’s easy to mix up “guaba” with the more famous “guava,” but these two fruits couldn’t be farther apart in taste or texture. Guaba, also called The Ice Cream Bean, is a fuzzy, sweet, melt-in-your-mouth fruit, unlike anything you’ve likely tried before. To enjoy guaba, break open the foot-long seedpod. Inside, you’ll find large black seeds covered in the white pulp. Be careful not to eat the seed (it doesn’t taste good!) Instead, suck on the fuzzy flesh and enjoy the subtle vanilla flavors.

The Maranon is the large fruit that grows with the cashew nut. While most consider the cashew to be the most valuable part of the plant, the maranon fruit (which resembles an apple) is also delicious! While you can enjoy maranon raw, it is more commonly blended for a fabulous fresh fruit juice. 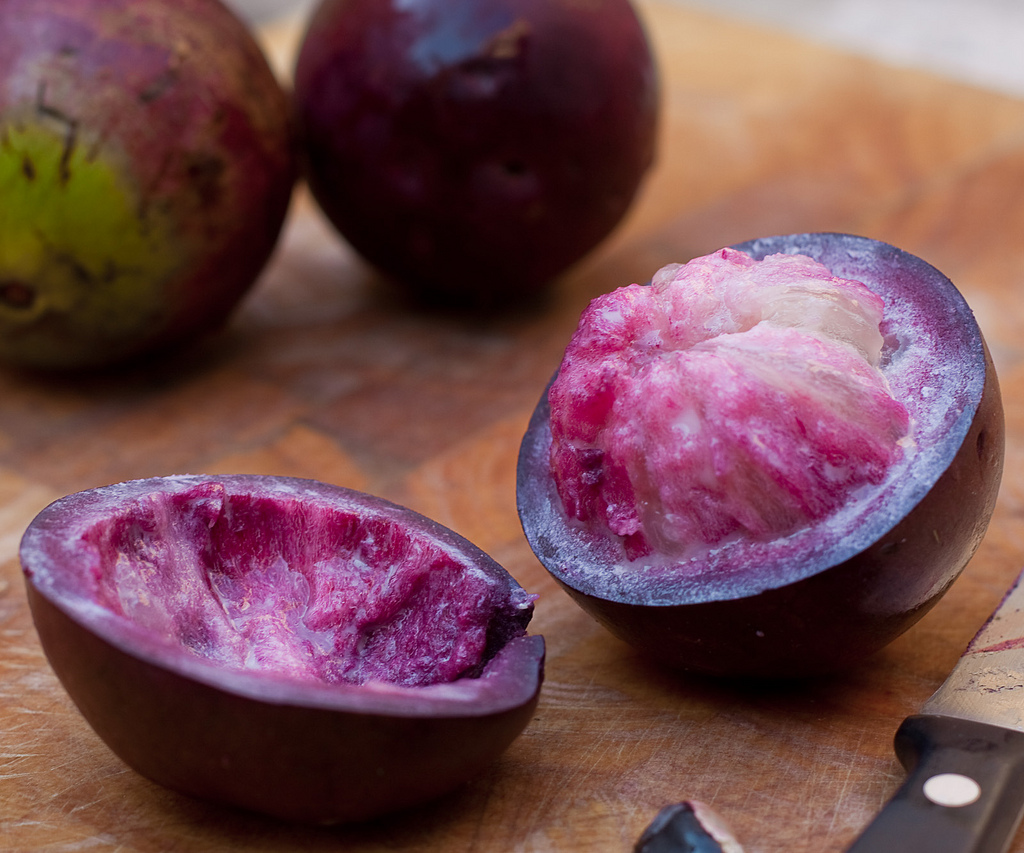 The Caimito is a type of star apple that is common both in Central America and Asia. When opened, the fruit inside resembles a star, hence its name. You might sometimes hear it referred to as “milk fruit” for the soft, almost milky texture of the white and purple flesh inside. Once you’ve opened the fruit, simply slurp the flesh out straight into your mouth.

Ask what natural juices are available at a local restaurant, and chances are cas juice will make a reoccurring appearance. This small, bitter fruit is typically not eaten alone, but a favorite for drinks and jams. Just don’t be surprised if you discover a little white worm in the fruit — just about every cas fruit has one hiding.

The jacote is a tart green and red fruit (depending on the ripeness.) Most locals prefer to chow down on jacotes when they are still hard and green, adding a generous amount of salt. If you’re visiting Costa Rica in late summer, keep an eye out for these from trucks and street vendors.

Also known as The Fruit of Love, the uchuva is a type of gooseberry originally from Peru. The small orange fruits can be bitter, but are excellent in jams and marmalades. Some consider uchuvas to be a superfood, so this is one fruit that’s worth the extra effort.

By A CRUISING COUPLE, From Travel Pulse

Tips for Budget Travel to the 2016 Rio Olympics

The Illusion of the Chooser