Researchers are hoping to relocate the turtle to determine its fate though signals sent through the acoustic tag, as the satellite tag had stopped transmitting a few days before capture.

The illegal turtle hooking was reported to the two conservation organizations, Pretoma (Costa Rica) and SeaTurtles.org  (US), that are working to protect turtles at Cocos Island and had tagged the turtle with satellite and acoustic tags in April 2012, and who coincidentally arrived at Cocos to continue the research on the same day.

Cocos Island is one of the world’s most famous dive sites, known for its schools of hundreds of hammerhead and other sharks.  Randal Arauz of PRETOMA and Todd Steiner, Executive Director of SeaTurtles.org,  have jointly been studying both hammerheads and sea turtles within the national park boundaries  in order to protect and prevent the extinction of these two endangered species.

“When fishers are willing to risk losing many thousands of dollars of gear, it confirms this is not an isolated incident,” said Steiner, who noted rangers have accumulated a mountain of confiscated gear on the island.

“In addition to our endangered species research, our organizations are working with the [Environment] Ministry to find more resources and better technology to protect this Costa Rican marine gem, which is now designated as a United Nations International Biosphere Reserve,” said Arauz.

The hooked turtle, named “Swift,” was one of 17 tagged with a satellite transmitter (and also an acoustic tag) to understand the movements of the species to determine if the marine protected area is large enough to keep the turtle safe during its long residency at Cocos Island. The satellite tag sends daily signals into space, which are captured and sent to researchers computers. The research is also trying to document and eventually protect its long-range 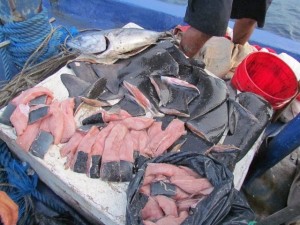 migrations, with an eye toward creating “protected swimways” between feeding and nesting areas.

Illegal fishermen, many of them shark finners, slink around the borders of the marine protected area, setting tens of thousands of baited hooks inside the reserve, and though park rangers do their best, they don’t have the resources or proper equipment to keep the reserve safe.

Longlining is an indiscriminate fishing technique that sets thousands of baited hooks on each line, essentially strip-mining the oceans.  Worldwide, more than 1.5 billion hooks are set in the oceans each year, threatening turtles, whales, dolphins and sea birds, while wiping out fish populations around the globe.

“We thank the Costa Rican National Park Service and the Ministry of the Environment for their work to thwart illegal fishing in the marine protected area, and to report this important data to us on the fate of the turtle,” said Randall Arauz, biologist and President of Pretoma.

“Pirate fishermen are wreaking havoc on sea turtles and sharks of the Pacific, even at this remote ‘protected’ site, more than 350 miles from the mainland, destroying one the most incredible hotspots of marine biodiversity in the Pacific,” said Todd Steiner, biologist and executive director or Turtle Island Restoration Network.

Sharks are caught for their fins, which are shipped to Asia to make ‘shark fin soup’ and tuna and mahi-mahi are caught and often exported to the US and Europe.