Costa Rica News – Found this post by Tica Macha of August 31, 2006 while surfing the Internet.  “Please, if I die in Costa Rica, DON’T let them bury me in one of those furry caskets! 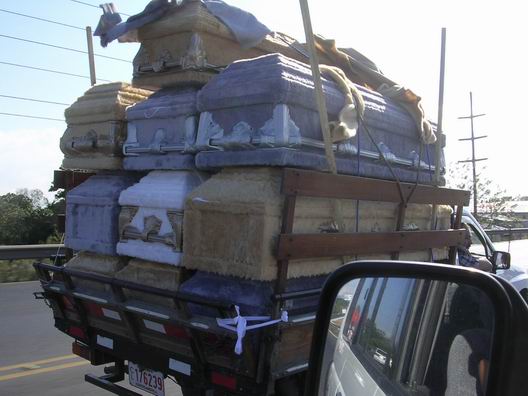 That’s the promise my girlfriend and I made each other when we passed this truck loaded with these five-foot furry caskets in the San Jose area.”

The story is still valid today, furrycaskets or “cofre de peluche” in Spanish, are common for funerals in Costa Rica.

It’s been some time, it was a couple of years before the Tica Macha post, I had the occasion to bury a friend. Frank Johnson was more of an acquaintance really, but, I was the perhaps the only friend he had in Costa Rica since it was me that the U.S. Embassy in San Jose called on.

The total cost of the furry casket, the funeral and the burial plot (in Curridabat that is still in my name) came to the equivalent of US$800.

Dying in Costa Rica is expensive.

Today, funerals starts around ¢600,000 colones (US$1,100), not including the niche or lot and can run into the millions of colones. Burial lots can add a few more million colones.

But, if you plan ealry, funeral homes (funerarias in Spanish) offer financing with plans that start around ¢5.000 colones monthly. Plans with a “big send off” can be double or more of that.

At some cemeteries you can rent a niche (yes, rent) for around ¢150.000 colones for five years.

Have you ever seen a furry casket?