World News – After reading this story I had to share it for all the people out there that have lost a loved one and not been able to experience the most important moments in their lives with them.  On a sunny Saturday in July, Rachel Wolf was preparing for the day she always dreamed of, complete with wedding gown, makeup, and guests. 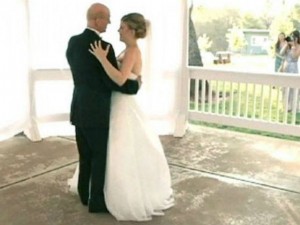 But there was one thing missing: a groom.

Instead, the day was about her dad. Rachel’s father, Dr. James Wolf, is dying of pancreatic cancer. He likely has less than three months to live.

So to make sure that he would be there on her wedding day, Rachel, 25, came up with an unusual idea: she would create and record her own father/daughter dance. The venue, Auburn Recreation Park in Auburn, Calif., the limo and the D.J. were all donated.

“I just was flabbergasted,” Dr. Wolf told TODAY in an interview that aired Monday.

“There are a lot of things that I would’ve liked the girls to experience with me being there,” Dr. Wolf said while choking back tears. “And I’m not going to be there.”

Just hours before the big moment, he was in the hospital. Later, he was so exhausted that he could barely get dressed without help from his wife, Jeanine.

“I don’t know what to expect,” she said. “I’m hoping that he’s feeling well enough to be able to get that dance in.”

A limo pulled up around 7 p.m., and Rachel stepped out in a white dress that sparkled in the evening sun.

“Thanks Daddy!” she cried.

Their embrace swallowed any sadness, conquered all worries. This bond was not yet ready to be broken.

Especially not before one last dance.

The song they chose was “Cinderella” by Steven Curtis Chapman. The crowd, which included Jeanine, Rachel’s sister Lauren, and a group of Dr. Wolf’s patients, looked on as father and daughter glided across the gazebo.

Though a man in the thralls of chemo probably shouldn’t exert himself, the dancing continued after the song ended: he danced with Lauren, and then with his wife. And just when you thought they were finished, the whole family joined in.

It was a celebration – perhaps not like Rachel ever imagined her wedding day was going to go, but an evening she will never forget.

“Each and every day, we have a choice,” Dr. Wolf said. “We have a choice to either love that person that’s in front of us or not. It’s the relationships that you build over the years that is the most important thing in life.”

“Everything else is just an illusion.”