Costa Rica News – Costa Rica is a large exporter of tropical fruits to all destinations in the world. Despite the shortage of pineapples that the country has suffered in recent months, Sancho, of Mariposa World Produce expects the situation to improve in October. 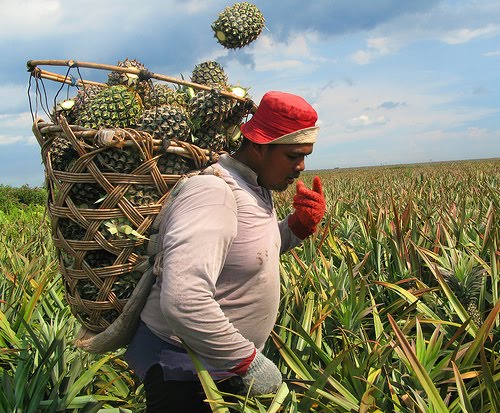 Besides pineapples, the other big product for Mariposa World Produce is bananas. The company exports premium quality pineapples and bananas under its own brand, Mariposa. “We export pineapples by sea and by air almost anywhere in the world. We ship the bananas mainly by boat, as by air it becomes too expensive,” explains Sancho.

Its main markets are the US, Canada and Europe, and it is now trying to access Asia, particularly China, Hong Kong and Japan. “We are currently shipping between 5 and 8 containers of bananas and pineapples per week to Europe,” adds the trader.
Sancho explains that the shortage of pineapples has been caused by the climatic issues suffered by Costa Rica during August and September, which has led to skyrocketing prices; however, he expects the supply and prices to stabilise from October.

As for bananas, this year the production has also been smaller than in previous years because of the impact of El Niño, and demand has increased, so prices have been a little higher than usual. Moreover, consumption of both fruits often decreases in summer. “Since it is a tropical fruit, there is a very good supply all year round, but in July, August and September people prefer stonefruit; however, from October to June, sales go back up. We believe it will be a good year, although more costly than normal,” explains Sancho.

Costa Rica’s tropical fruits compete with several countries in South and Central America, especially Peru. Ecuadorian bananas also have a great reputation, although the country has been adversely affected by El Niño. In any case, Sancho affirms that Costa Rican bananas are also of excellent quality and the Government of Costa Rica is seeking to obtain a designation of origin for them.

Mariposa World Produce
Mariposa World Produce is a company under the umbrella of the Unifruta.com Group, which is headquartered in Canada, created to market tropical fruits directly from the source, without any intermediaries. The company buys products from other producers in Costa Rica and is responsible for cutting, packing and exporting them under its premium brand Mariposa.