Autumn is at its peak in northern California, and the normally muted colors in this Mediterranean climate are more intense than usual this year. A path behind the entrance is ablaze with red, gold and orange. 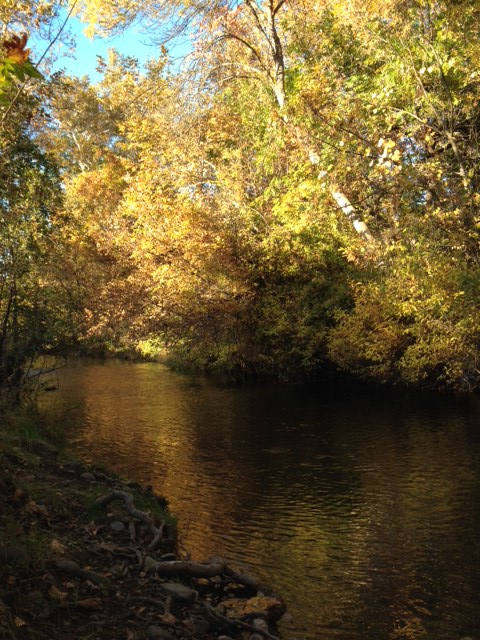 The gate is closed to vehicles during the week, and the half-mile walk to and from the sitting spot bookends one’s meditation. The wired world, on both senses of the word, is left behind, and walkers, runners and cyclists are usually friendly.

There is great beauty in watching the procession of fallen leaves float by on a placid stream. The entire movement of life and death is there, and one is completely part of it and carried with it when thought and self cease operating.

Stopping at the west-facing bench at the entrance to make a journal entry after the sitting, an intense sunset has begun.

The dying glow of the day bathes the most magnificent Valley Oak in the three-mile stretch of the park within the city, and everything else in a quickly changing and deepening color—orange-red to magenta to a deeper purple.

Some people don’t even notice; others stop and watch the sky unfurl the color. The earth seems to hold its breath in the complete stillness of the immense beauty.

Paradox is in inherent in life; contradiction is the human condition. They are very different things.

There is a great paradox in initiating the movement of negation—the single most important action of a human being in daily life.

On one hand, there cannot be a scintilla of effort for negation in meditation to occur. On the other hand, meditation is arduous, requiring strong intent and significant space, the ability to set aside problems and daily concerns.

How many people even understand what the movement of negation is? To most, it must sound like a strange and undesirable thing. Why would anyone want to negate the self and everything they think, believe and have experienced?

But that is part of the paradox. For as all true teachers have said, it is in ending that we begin, in losing our selves that we grow into human beings, and in being nothing that we are part of everything.

Humans are additive creatures. Memory does not delete, but accrete. It takes a certain kind of work— perhaps a better term would be spadework—for unnecessary and harmful memories to be extinguished.

Most people believe memory is what makes us human, and that may be true if by human we mean the suffocating movement of 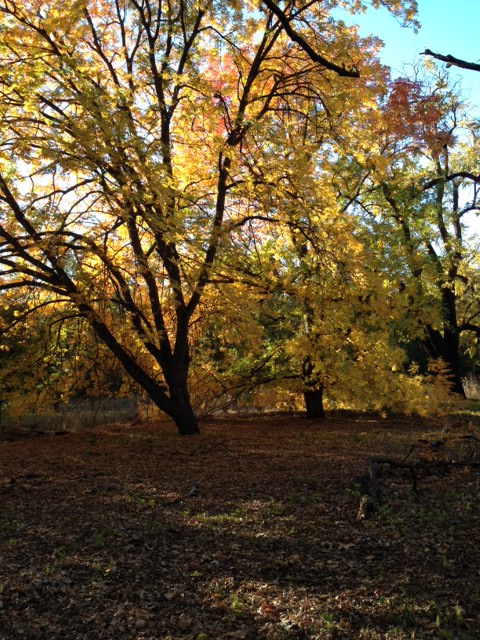 the past overshadowing the present and enshadowing the future. But if we want to grow into a human being, negation is essential.

Computers are and will always be things of memory. People are even talking about downloading our personal consciousnesses into them, enabling a perverse kind of immortality. I submit that the true purpose of computers is to free us from memory. Liberation is freedom from the accretion of memory and the tyranny of conditioning.

So negation in meditation means ending the domination of memory in the brain. Any effort to do so only strengthens the movement of thought/self however. Concentration has no place in meditation.

Attending to the entity that is making the effort, which has desires for this or that, and thinks it stands apart and observes and chooses, is the key. The observer prevents observing, the watcher precludes watching.

Thought operates like a computer, and computers replicate functions of thought. The observe/self is the operating system, which is just a higher order of programming.

Why do we hold the operating system of thought in the brain—the self—as inviolate? Is it because we think we are nothing without the ‘me,’ with all its petty, personal conditioning? Is it that we don’t see, at an emotional level, that something else defines us as human beings, namely awareness, insight and understanding, which aren’t based in memory, thought and experience?

To reset and renew the brain, the entire computer of thought must be turned off. But there is no switch that ‘I’ can use to turn off the run-on mind, because the ‘I’ is the source of the run-on mind, which includes leftover emotions.

So how does one turn it off? The brain has another capacity—for awareness and attention—which cannot be programmed. That’s why concentration, even Zen-like concentration, is antithetical to meditation. It’s attempting to use a function of thought to trick thought into silence.

Meditation is not hypnosis of any kind, but occurs when memory and all the programs of memory spontaneously fall silent in attention to their movement in the present.

The spontaneous cessation of thought, which is the movement of memory and includes conditioned emotions, is everything. It can only happen by allowing awareness to grow quicker than the reactions of thought. That occurs by passively watching thoughts and emotions in the present without the reactions of the observer, simply as a single stream.

Attention gathers effortlessly into an all-inclusive intensity, and the mind-as-thought spontaneously falls silent. Then there are not merely insights, but the state of insight. Wholeness is holiness.

Article and Pictures by Martin LeFevre

Pregnant Teenage Mannequins in the Mall