Do Your Pets Give You Super Bugs?

Health News – Be this as it may, I am still going to be sleeping with my dog. 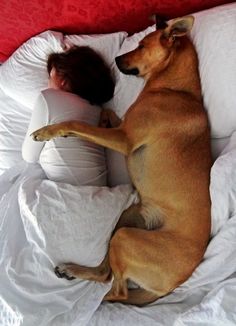 Pets might be a source of drug-resistant superbugs, Chinese researchers reported Tuesday.

They found a pet shop worker infected with a much-feared antibiotic resistant strain of E. coli may have been infected by dogs at his store that carried the same strain.

The 50-year-old man with a kidney inflammation had an infection with E. coli bacteria carrying the dreaded mcr-1 gene — a little cassette of DNA that provides resistance to an important group of antibiotics, which other bacteria can pass around like a tray of snacks.

Tests on 39 dogs and 14 cats in the pet shop where the man worked turned up mcr-1 in four dogs and two cats, they reported in the journal Emerging Infectious Diseases. Plus the bacteria infecting the animals were resistant to a range of other drugs, too.

“All six isolates were resistant to colistin, polymyxin B, cephalosporin, gentamicin, and ciprofloxacin,” they wrote.

The genetic sequences of the bacteria infecting the man matched those found in some of the dogs, Xue-Fei Zhang, of Sun Yat-Sen University Zhongshan School of Medicine in Guangzhou, and colleagues wrote.

Two other men in the same hospital ward also were infected with drug-resistant E. coli. The researchers don’t say whether they think the pet shop worker infected them, but it’s a possibility.

Mcr-1 protects bacteria against an antibiotic called colistin, which isn’t used much because it damages the kidneys and has to be injected. But colistin is often the only antibiotic that will work against a type of superbug called CRE, for carbapenem-resistant Enterobacteriaceae. Doctors call it an antibiotic of last resort.

So if a CRE superbug gets hold of mcr-1, whoever is infected with that superbug would have no treatment options. These are all very contagious bacteria, and while the most vulnerable people are the very sick patients in hospitals, anyone could catch one during surgery or even out in public.

Mcr-1 was only seen for the first time last November, but checks back into samples on lab shelves show it’s been around in both people and in food animals. Scientists believe people may be infected by food animals in some way.

Pets could be infected via the same route, and if they can infect people too, that provides more opportunities for the superbugs to spread.

And scientist fear an E. coli bacteria with the mcr-1 gene could pass it to another superbug with other mutations — creating a truly super-superbug that resists all known antibiotics.

The CDC says more than two million people are infected by drug-resistant germs each year, and 23,000 die of their infections. The biggest killer by far in the U.S. is diarrhea-causing C. difficile.