Do You Want to Own Costa Rica’s Floating House?

Costa Rica Real Estate – The agent of Casa Flotante, or “The Floating House,” describes it as a blend of “tropical luxury” and sustainable design. The home’s architect, Benjamin Garcia Saxe, is known for designing environmentally conscious homes that integrate seamlessly into their environments, without sacrificing comfort and beautiful design.

The Floating House, which was built in 2013 from entirely local materials such as teak, bamboo and cedar, has won five awards, including the 2014 International Architecture Biennial of Costa Rica. Its owners, Dahlia Nahome and Jez Gooden, who work in marketing and ocean conservation, share an interest in sustainable design and positive living. They are selling the house to focus on professional growth in the U.K., where they are based. The Floating House is the first of Mr. Garcia Saxe’s designs to hit the market, as owners tend to be reluctant to part with his stunning designs, according to listing agent Andres Riggioni.

The treehouse-like home is comprised of three pods raised up on stilts to float at the level of the jungle canopy, connected at the rear by a bamboo corridor. The design of the home was a direct response to the challenges posed by its environment.

“The biggest challenge we encountered,” Mr. Garcia Saxe said, “was that the plot of land was predominantly comprised of a very steep slope, and the view of the ocean could only be seen from the upper-mid portion of the site.” Raising it up on stilts not only opened up the view, but meant that the structure would not interrupt the natural water flow of rainy season, which runs down the mountain under the house.

The house is approximately 3,230 square feet, stands on one-and-a-half acres, and has three bedrooms and two bathrooms.

Although the home has air conditioning available, its design means it can be kept ventilated year round without a need for it. The pods that comprise the structure are positioned to allow in light, but not direct heat, and the bamboo walkway at the back of the property acts as “the lungs of the home,” allowing the cooling tropical breezes that come off the ocean to pass right through, passively cooling the home. 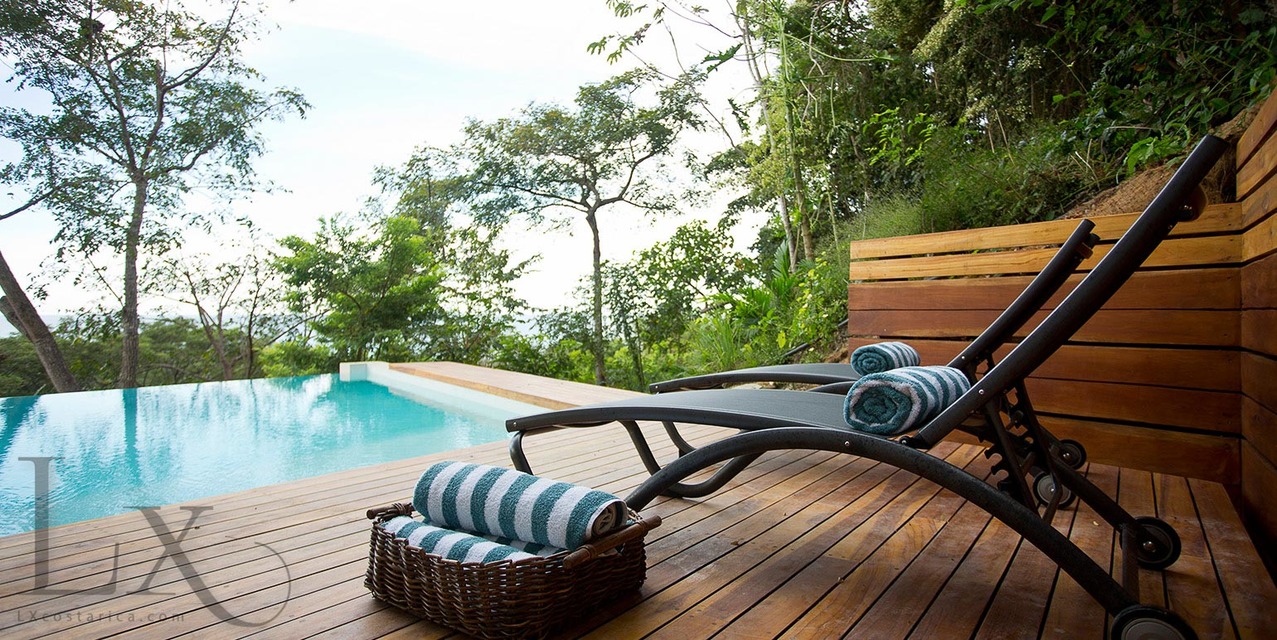 The home’s elevated position is also perfect for catching breezes.

Mr. Gooden describes the “lovely natural feeling that comes from harnessing the breeze,” allowing the space to be kept open to the elements.

The home also has a five-car garage and a UV water filtration system, as well as an infinity pool and deck.

While the nearest town of Santa Teresa (a 10-minute drive away) has a handful of shops for the essentials, the real draw is its world class beaches. The owners of the Floating House have described it as the “Ultimate Surf Home” for its laid back feel among the treetops and direct views to the renowned Santa Teresa beaches.

Because people from all over the world are drawn to the beach and surf lifestyle of Santa Teresa, the town also offers an unlikely but impressive sampling of authentic world cuisine, according to Mr. Riggioni. You can find Asian and Italian food, French and German bakeries, as well as a delicious locally made ginger beer.

Traveling On A Rainbow