Dive with Sailfish at the Zancudo Lodge in Costa Rica (Video)

Costa Rica Travel –There is a place on the coast of Costa Rica, not too far from the point of Cabo Matapalo, where the sailfish hunt on the surface with their sails fanned out. Those who have ventured to this remote corner of the world describe it as a fishing paradise. 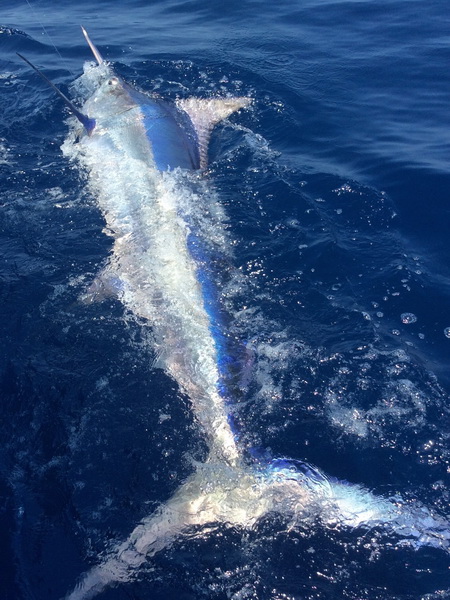 “There is a lot of life. Every now and then we would see a sailfish jump clear out of the water to shake the parasites off,” said Zachary Frankel, 15, and a Wall resident.

Frankel may have made the most breathtaking catches and releases of sailfish every submitted to the pages of the Hook, Line and Sinker when he swam with several of them after besting them on rod and reel.

That is just my opinion, but it’s not everyday you get a photo of someone swimming with a sailfish. After all, they’re capable of hitting 70 m.p.h.

His father Seth Frankel said his son accomplished this feat during their vacation at the Zancudo Lodge in Costa Rica this month; it’s a place he’s been going to for 15 years. He’s been taking his two boys for the last six years.

“As for swimming with the sailfish that just developed this year. My son Zachary said that he wanted to jump in with a sailfish and take pictures when we (were) done tagging the fish,” said Frankel.

The Zancudo Lodge is on the west coast of Costa Rica, pretty close to the border of Panama. It’s 10 miles from its spot on Pavon Bay, surrounded by tropical gardens bearing fresh papayas and mangos, to the Pacific Ocean. And from there only another five miles to the sailfish grounds.

There anglers troll for sailfish much like canyon fishing here. When the fish pop up in the trolling spread, seduced by the movement of the artificial lures, they hit they them with the bait and switch.

That means they put a fresh bait, in this case blue runners, on a baited hook and toss it back to the sails to get them on the line.

“When I first went to the lodge it was called Roy’s Zancudo Lodge and it was basically a fish camp. There were no families there, just guys who wanted to go fishing,” said Frankel.

About a decade ago Frankel said Gregg Muffson and Goldine Wang bought the lodge and turned it into an oasis in the middle of nowhere with five-star accommodations. They bill it as the ultimate fishing adventure.

“I’ve become good friends with them and it’s like visiting family when I go. The people in Costa Rica are some of the friendliest people I know,” said Frankel.

He’s introduced his two sons, Zach and Jake, 13, who have become his steady companions to this distant tropical location

They are all avid fishermen who fish for striped bass and tuna here in New Jersey. In Costa Rica, they fish with Rafael “Rafa” Lopez, one of the lodge’s captains.

Like the tropical fruit that is so abundant at the lodge there is no shortage of fish in the local waters. Their trips offer marlin, sailfish, tuna and mahi-mahi, roosterfish, groupers and snappers, pompano, permit, a variety of jacks and a host of other tropics.

On this trip the Frankels had caught and released several sailfish in the 120-pound range. When they got the sailfish boat side, removed the hook and started reviving them is when Zach took his chance to jump into the water.

“They’re not like marlin — big tough things. After the fight they get tired. As long as you hold them right, they’re fine with it,” said Zach Frankel. “I hold the bill until I get to a five-foot range and let go and swim another five feet with them.”

Then the fish continue on into the deep on their own, he said.

Muffson took the underwater photos with a Go-Pro camera that was filming and taking still photos on a timer every five seconds, Seth Frankel said.

“By the end of the trip he swam with four or five sailfish,” said Frankel.

How Does Banco Nacional of Costa Rica Chose Its Employees?