Costa Rica News –  For those that are on social media this story has been picking up steam to go viral, Some people should have the same thing happen to them as they do to animals. 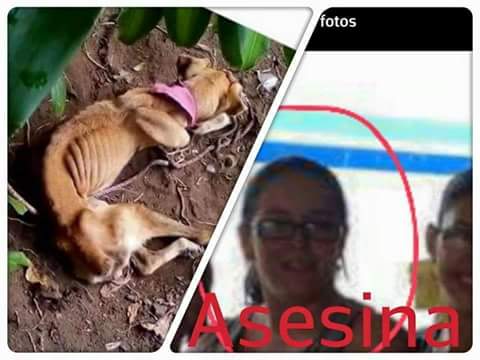 One poor dog suffered tremendously after being adopted by a woman named Aragón. She kept the dog without food for weeks.

The dog’s body had absolutely no muscle over the bone.

He was anemic, dehydrated, pale, dry eye, conjunctivitis, and had bacterial diarrhea with undigested blood, signaling the presence of ulcers.

Neighbors alerted authorities and the dog was treated at a veterinary clinic but it was too late. It was the worst physical condition the vet had ever seen.

The lady had adopted the dog five months ago and he could no longer endure the condition. He died of a heart attack on monday.

There is a case pending against the animal abuser who will have to appear in court. She also lost her job at the Bilingual Country Kids Center. She was fired because the virtue of teachers and human principles are interconnected.

They did not want such a person working there.

Honestly, I think a person like this should not be walking on the planet, much less have employment anywhere.

We can only hope that Costa Rica makes sure she is punished for this animal abuse.

Costa Ricans Lost at Sea on Way to the USA Illegally