Costa Rica Travel News – Costa Rica is bordered by two oceans, the Pacific Ocean and the Caribbean Sea. The Pacific side has large resorts and draws more tourists, but the Caribbean is also appealing in it’s own way. Although Costa Rica is part of Central America’s mainland, it has a Caribbean island feel to it on this side. The sand is white and the water see-through. The lifestyle and culture are more laid back. If you want to experience this part of Costa Rica, there are several towns to pay a visit to. 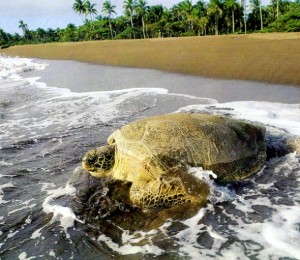 Tortuguero is the land of turtles in the northeast corner of Costa Rica. Tortuguero National Park reaches the Nicaraguan border and is only accessible by boat or plane. The boat ride is quick and inexpensive, making this park the third most visited in the country. There you can see hawksbill, leatherback, loggerhead, and green sea turtles as they come on shore to nest. You may also see baby turtles hatching and flopping toward the sea.

Puerto Limon is the capital of the Limon province and home to 60,000 people. It’s a bustling trade center. Many cruises stop at or pass by Limon. It’s a good starting point but there’s not much to do and it can be dangerous. It’s better to use Limon only as a point to travel through to the southern beaches.

Cahuita is near the party town called Puerto Viejo. It’s beaches are a bit cleaner and less crowded than Puerto Viejo. The national park found there is out of this world. Cahuita is home to the Sloth Sanctuary, where you can see dozens of rescued two and three toed sloths. You may also enjoy a visit to the Tree of Life Wildlife Rescue Center & Botanical Gardens.

Puerto Viejo de Talamanca is the most popular Caribbean beach for backpackers and surfers. There are hostels and luxury accommodations. There are tons of bars, a few clubs, and the best food sold in local sodas or on the street. Music plays in the street all night long and the party never stops.

Manzanillo is one of the southernmost Caribbean beaches; it nearly touches the Panamanian border. The village is inside a wildlife refuge so bird watchers and nature lovers looking for a quiet getaway love this serene town.

Buses go from San Jose to the Caribbean from Gran Caribe Bus Terminal between 6a.m. and 4p.m. for around $8. You can also opt for a semi-private bus called Interbus for $35 or a taxi for $150. Once you arrive in Puerto Limon you can catch a taxi to the southern beaches for $15.

The Caribbean side of Costa Rica has received a bit of a bad rap lately but as long as you keep your wits to you, you can truly enjoy this part of Costa Rica.

Avoiding the Most Common Scams in CR

There are quite a number of black sand beaches on the Caribbean coast; they are know as Black Beach in both Cahuita and Puerto Viejo. Should someone wish to visit the beaches south of Puerto Viejo, there are direct buses leaving San Jose to Manzanillo throughout the day, although they are not as regular as the buses that go to Sixaola. The boat trip to Tortuguero cannot be described as fast; it takes five hours from Cariari which is the cheapest route and is fairly expensive as a trip from Moin. I am thrilled to see that the Costa Rican Times are doing their bit to promote the wonders of the Caribbean Coast but a little bit of research could go a long way in informing your readers.