Lately I’ve been talking about once a week via skype with my radiki in Tanzania, Emmanuel. He’s 27, and works in the environmental sector helping villagers in his region with water and solar projects.

Emmanuel has been reading ‘Meditations’ for seven years, first in the local paper, and then online when the Arusha Times went under two years ago.

Our opposite-sides-of-the-world talks contrast with the localism that progressives, and now conservative pundits in America have been propounding. Not able to peddle their nationalistic drivel any longer, some conservatives have suddenly discovered “the localism revolution.”

A philosophy and movement that’s been de rigueur on the left for more than a decade is being touted as “the coming wave that will bring conservatives and liberals together.” 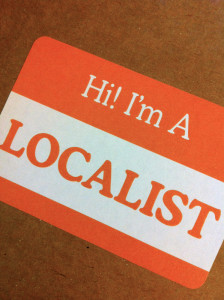 Beyond the pollyannaishness, you know that the wave has already crested by the time NYT/PBS/NPR commentators start heralding it from the right.

“Mayors and governors are fulfilled,” we’re told, “producing tangible results because cities have more coherent identities than the nation as a whole.” False. And worse, half true.

Localism has been a source of optimism and pragmatism for people on the left for over a decade as the national fabric frays and the global society bays. It was only a matter of time before hoary conservative voices began bootstrapping onto their bootstraps.

The nation-state is long past is use-by date, and “the American-led liberal world order is unraveling”—and being lamented as if it was God’s gift to humanity.

The Marshall Plan was a magnanimous gesture and smart economics, allowing the UN, NATO, EU and WTO to follow and flower to a degree. But the end of the sovereignty (literally, supreme principle) of the nation-state in an increasingly interconnected world was inevitable. So what comes next?

Stepping into the vacuum of ethics and leadership in the global society are two movements: people with local knowledge and connections focusing on their municipalities and localities; and “ravenous strongmen who want to remake the world order.” The former is healthy, the latter ominous.

We need to square that circle between local and global, which of course is only possible if we open the circle. The issue is wholeness. To the degree that local responses come from wholeness, they contribute to the wholeness of humanity and are true; conversely, to the degree they add to the fragmentation of humanity they are false and increase human disorder.

In medium-to-large cities across the globe, people are not thinking in terms of countries anymore. ‘Think globally and act locally’ is not just an old slogan; it’s the dominant reality, though national politicians clinging to power are inflaming nationalism in ignorant people. 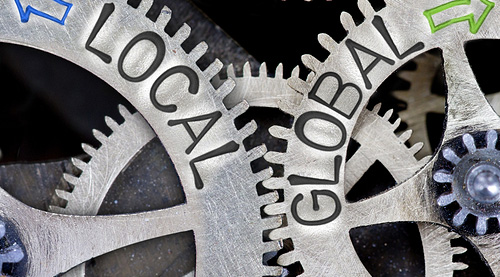 Superficial thinkers speak of localism as “literally flipping the power structure.” But that too misses the mark, since power is being redefined, not flipped. Indeed, the very notion of power, which has always carried with it a strong or weak current of conformity and coercion, is being questioned. Is it power if there is no coercion?

Ridiculing unified global action as “mere whimsy” because it “lacks the centralized control of key economic sectors the global crisis demands” is utterly wrongheaded. The sum is greater than the parts. There is a real possibility that the microcosm of localism could dovetail into the macrocosm of an adequate global response to the hydra-headed human crisis.

Of course power should ‘devolve’ as much as possible to the local level, but localism cannot fill the vacuum of leadership at the global level. The more people on the left or the right push that idea, the more human fragmentation grows.

Localists on the left and their newfound bedfellows on the right tend to forget the axiom: the parts never make a whole. Of course, most local responses do not purport to be an adequate response to the ecological, economic and political crisis facing humankind.

An adequate response at both the local and global level will follow the principle of simultaneity, in which local responses combine with global insight and vision to allow cities and localities to flower in a global context.

The real revolution of locality will therefore occur when its participants see it as a microcosm of a revolution in human consciousness as a whole.

Fittingly, Emmanuel sent me the Swahili word for love this morning: Upendo. When the love for humanity and community (in that order) ignites, that will truly upend and replace the old order.