World News – More than any of the bizarre traditions in American history, the “special meal” served to a convicted felon just prior to execution has captured the imagination and curiosity of just about everyone from movie moguls to legal scholars to scientists. 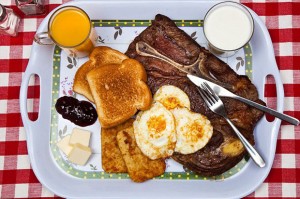 There is a historical suggestion that the meal serves as a means of reconciliation between the murderer and the society that has extracted final revenge, perhaps even making the executioner feel more comfortable in his solitary role.

But a new study offers evidence that the last meal provides a last chance for a person who feels he or she has been unjustly condemned to show innocence.

Researchers Kevin M. Kniffin and Brian Wansink of Cornell University have looked at the last meals requested — or rejected — by 247 persons who were executed in the United States between 2002 and 2006 and found that those who maintained their innocence to the very end were far more likely to reject the meal than prisoners who had accepted their guilt.

“Those who denied guilt were 2.7 times as likely to decline a last meal than people who admitted guilt (29 percent versus 8 percent,)” they conclude in their study, published in the journal Laws.

Prisoners who were “at peace” with their sentence, as the researchers put it, asked for 34 percent more calories than those who insisted they were innocent, and the “innocents” asked for “significantly fewer brand-name food items.”

The researchers see the declination of a last meal as an opportunity for a prisoner who thinks the conviction was wrong to tell the executioner to, well, shove it.

“Last meal requests offer windows into self-perceived or self-proclaimed innocence,” the researchers claim, and thus could provide a sort of court-of-last-resort verdict because if innocent people won’t eat, and guilty people will, perhaps the system ought to pay more attention to the final menu.

They concede in their own study, however, that there are “several limitations to generalizing from our analysis,” since claims of innocence might not be altogether honest reflections of the prisoner’s real opinion, and there is little continuity in how the records are kept from one prison to another, and most (71 percent) of the prisoners who claimed to be innocent still wanted that last meal.

Still, the results are intriguing and offer an additional reason for continued analysis of death row’s “special meals.” Why they are offered, what they mean, and why this started in the first place remains ambiguous.

It is generally thought that the tradition started centuries ago in Europe, when the last meal was seen as a way to deny vengeance on the part of society — so the meal must have been pretty good — and to allow the condemned a bit of peace before the blade dropped. It was also supposed to prevent his ghost from returning.

However, the law of the land in England, at least, as of the 18th century, was solitary confinement, on bread and water, until the end. So go figure. More recently, in the United States at least, the ritual has taken on a broader use, especially in highly publicized cases.

Odell Barnes, a 31-year-old black male, was sentenced to death in 1991 for murdering his lover, Helen Bass, in Texas. The case was based on the testimony of a sole witness who said he saw Barnes fleeing Bass’s home on the night of the stabbing. The evidence was considered so weak that Barnes became a poster child for the anti-execution movement.

Just before his execution, and still claiming innocence, Barnes was asked what he wanted for his last meal. He answered: 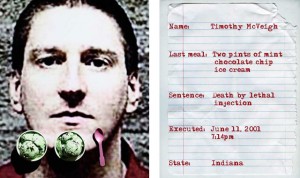 Timothy McVeigh, the domestic terrorist behind the 1995 Oklahoma City bombing that claimed 168 lives, was executed in 2001 after eating two pints of mint chocolate-chip ice cream.

Controversy over the last meal can linger long after the execution. One of the most famous examples involved Ricky Ray Rector, who shot and killed a police officer in Arkansas and then tried to blow his own brains out. He survived with what amounted to a “frontal lobotomy,” which many claimed left him mentally unfit to stand trial.

He specifically asked for a slice of pecan pie as part of his last meal, but he didn’t eat it, apparently thinking he would enjoy it after the execution. Many still argue that showed he was incompetent and “did not understand his fate,” as one scholar put it.

Ignoring appeals from Pope Benedict XVI and former President Jimmy Carter, as well as thousands of others, Troy Davis was executed in Georgia in 2011 for killing an off-duty police officer. Davis, like others, used his opportunity to request a special meal to make a statement:

“This meal will not be my last,” he said.

One condemned man eliminated the opportunity for others in his situation to ask for any special meal at all.

Lawrence Russell Brewer asked for two chicken-fried steaks with gravy and sliced onions, a triple-patty bacon cheeseburger, a bowl of fried okra with ketchup, a pound of barbecued meat with half a loaf of white bread, a portion of three fajitas, a meat-lover’s pizza, ice cream, peanuts and on and on. When the meal arrived, he declined it, saying he wasn’t hungry.

The stunt so angered Texas authorities that the last-meal tradition was abolished in 2011.

Murderer Gary Gilmore got something that is denied to most inmates: three shots of whiskey. He died by firing squad in Utah in 1977.

Bruno Richard Hauptmann, convicted of kidnapping and killing Charles Lindberg’s baby, may have had more accusers, and defenders, than any other defendant in American history. Many, including Hauptmann, insisted he was innocent, and he went to the chair believing he would be spared. He had been told he would, if he just confessed to the crime.

He didn’t, and he died, after his special, curious meal of celery, olives, chicken, French fries, buttered peas, cherries and cake.

None, however, was better at rubbing salt in the wounds than Adolph Eichmann, the Holocaust mass murderer of World War II. His last meal:

A bottle of Carmel, a dry red wine from Israel.

Only in Costa Rica for Week of February 10th