Entertainment News – For all of you Dave Matthews fans out there, what would you do if you were on the way to his concert and got to pick him up and take him there? A woman on her way to see the Dave Matthews Band perform in Hershey, Pa., on Saturday stopped her car to help a stranded bicyclist — and in the process saved the very rock show she was going to see. 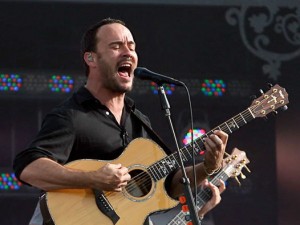 Emily Kraus and her boyfriend, Joe, were already running late when they noticed a man on the side of the road. When they pulled over to help, it was none other than Dave Matthews.

The singer was out for a pre-concert bike ride when he got a flat tire, and he didn’t have a cell phone to call for help. Kraus happened to have a bike rack on her car, and she told local TV station CBS 21 that Joe helped Matthews load his bike while she held his helmet.

Matthews then got in the car and rode with the couple to the concert. The three made small talk about his tour, and Kraus told CBS 21 that the rocker was very humble. He later invited Emily and Joe to dinner, had them visit backstage and gave them front-row seats for his show.

During the concert, Matthews made mention of the whole ordeal and the “nice lady named Emily” in the red car who gave him a ride to the gig.

In reply to a photo posted on CBS 21’s Facebook page, Kraus said she has been listening to the Dave Matthews Band since she was 9 years old. “All the planets aligned last night — something greater then I’ll ever be able to comprehend,” she wrote, adding later, “My cheeks still hurt from smiling, giggling and laughing all night long … this will always be remembered.”

What a memorable night for both Dave Matthews and his fan……how many other people would have driven right past?