Costa Rica Travel News –  This cruise ship season in Costa Rica just started with the arrival of 1,875 passengers on the Island Princess, this past Wednesday. The cruise sector has been declining in the last couple of years. 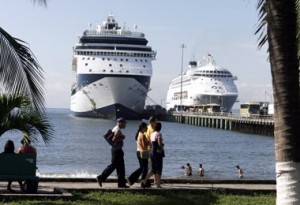 The current season ends on May 30th, with only 59 ships scheduled to dock in Limon. Locals who depend on income from the ships are worried. The factors coming into play can include weather, fuel costs, and route changes. Some strikes and public demonstrations have made cruise lines complain to Costa Rica’s government. Another factor is that long cruises are no longer popular. People are generally looking to fit in a large number of ports in a short trip and Costa Rica’s a bit too far.

One solution is to build a cruise-ship-exclusive dock with shops and cafes. This would be more attractive than the business oriented port in Limon currently. The projected Moin Terminal Project could help to separate tourists from the import/export market.

Although each tourist pays only $3.50 to disembark in Costa Rica, in 2011, that added up to $276,000 for the Limon Municipality, one of the poorest in the country. In 2012, that decreased to $122,000. Local artists are losing money from the lack of cruise tourists. The province of Limon has high murder and unemployment rates. Efforts must be made to safely transport tourists to nice areas along the Caribbean from the port.

Last week, the ICT signed an agreement with the Royal Caribbean Cruise Line to promote Costa Rican tours to L.A., San Francisco, New York, and Boston. They also recently made an agreement with JAPDEVA to improve boarding rooms and outdoor areas near the port. Lastly, they partnered with the Florida-Caribbean Cruise Association to create closer ties with cruise executives.

Colombian Women Strike By Saying “No” To Sex (Audio)

The Future of Sex Education in Costa Rica