Costa Rica Travel News – You can learn a lot about a country by walking into it across a land border. VIP’s enter at the airport or zoom through in a car, but when you walk across the frontier, especially in a developing country, you get a window into how ordinary people and traders travel. 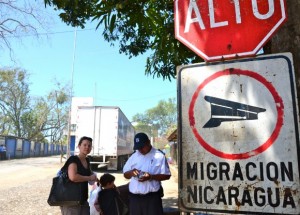 Before leaving on a recent trip to Costa Rica and Nicaragua, I tried to research the logistics of how we would get from the Liberia airport, where we were supposed to drop our rental car, to San Juan del Sur, Nicaragua, but found no definitive take on how much it costs or what the transportation options are. So when a cab driver I talked to at a gas station in Liberia offered to take us from the airport to the border the next day for $80, I wasn’t certain if it was a good deal but agreed to it nonetheless for lack of any better ideas (with my wife and children in tow, we weren’t up for taking a chicken bus).

Francisco, our courtly silver-haired driver turned up on time, but we soon realized that his A/C was broken.

“Too expensive to fix it,” he explained. “Sorry.”

Not a good sign on a sweltering hot afternoon, but he said the ride took only an hour, so I had no problem sweating it out. We puttered along in Francisco’s old pickup truck as swarms of cars passed us on the Pan-American Highway. I knew we were going slow but had no idea how slow because Francisco’s speedometer was also broken.

As we neared the border, we passed a few security checkpoints where police officers checked for illegal immigrants, guns and drugs. The homes on the side of the road were smaller and more improvised the closer we got to the border and even before we arrived in Nicaragua it seemed as though we’d left the middle-class comforts of Costa Rica behind.

Our hotel in San Juan del Sur, the terrific Villas de Palermo, hooked us up with a company called Iskra Travel that was supposed to transport us from the border to San Juan del Sur for $45. But the driver was supposed to meet us at the border at 1 p.m. and Francisco was sputtering along so slowly that we didn’t reach it until 1:30, and we hadn’t even cleared customs yet, so I had no idea if the driver would wait for us on the other side.

There was a long line of travelers waiting to get into Costa Rica but when we asked where to enter Nicaragua, people in line pointed off in the distance. There’s a no man’s land that must be a good mile long between the two countries with very little shade. It was sweltering – easily 90 degrees (probably more) – and we were transporting two small kids, a stroller and a few pieces of luggage.

By the time we reached a uniformed Nicaraguan border guard, my shirt was completely soaked through in sweat. Costa Rica abolished its army in 1949, so the border area isn’t the kind of tense frontier where photography is a problem. I took advantage of the loose atmosphere by snapping a photo of my wife as the Nicaraguan border control officer examined her passport.

I assumed we were going to be waved into the country in a matter of moments but the guard had a problem with our passports. My wife and I both have very mediocre high school Spanish and it took us a few minutes to realize that he wanted us to go back to Costa Rica to get an exit stamp. 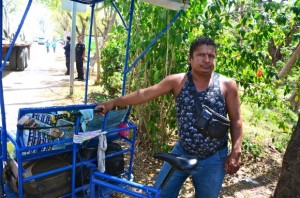 He said we all had to go back, not just me, and I wasn’t about to walk the mile in the hot sun with all the baggage again, so I hired a rickshaw driver to cycle us back to Costa Rica.

At first, I was annoyed by the hassle, but within just a few seconds of being on the rickshaw my mood brightened considerably. There was a light breeze and being carted around felt like a beautiful little luxury that was well worth the $8 (round trip) our driver asked for.

Back in Costa Rica, we were directed around to the back of the immigration building to a room that was empty save a few officers at their desks. Lots of people were waiting to get into Costa Rica but we were the only ones leaving.

“They sent you back for exit stamps?” asked the Costa Rican officer, watching the beads of sweat pore off my chin onto my T-shirt.

“Yep,” I said, and the officer and a colleague sitting next to him laughed, as if our exertion was the most amusing thing they’d experienced in years.

On the way back to Nicaragua, our rickshaw driver asked me how much I paid for my camera. Given the situation, I wasn’t eager to admit that it cost $1,200, so I lied and said, “$100” (see video).

“But I need a camera,” he pleaded.

I just ignored him and soon enough we were back talking to the same Nicaraguan official and this time he stamped us in. But our brush with Nicaraguan officialdom wasn’t quite over. We walked another few hundred meters and then stood around in the hot sun wondering where to meet our driver from Iskra Travel. We were 90 minutes late and I assumed he’d given up on us.

A trio of young men came by to hector us about buying forms from them. I was sure it was a scam and ignored them, but my wife, who is from a small town in the Midwest and can’t help but be nice to everyone – even annoying pests and con-men – entertained their sales pitches.

“They have badges,” she said, “they seem official.”

I examined the peskiest guy’s badge and confirmed that he worked for some travel agency, not the government. He wanted us to pay $1 for immigration forms that were supposed to be free. We headed off to the east of the road toward a cluster of buildings and noticed two car rental companies: Alamo and National – good choices if you want to use a company that has offices at the border.

We gravitated to a line where we paid about $4 to a bored looking clerk who then pointed us to another line right across from his booth. As we stood in that line, my older son made a card with his birthday and half-birthday on it to give to the Nicaraguans (see photo above) and a mentally-disabled person began to emit piercing calls, followed by maniacal laughter and ear-to-ear smiles. My older son covered his ears and everyone else smiled nervously or gave him some coins. It was a welcome to Nicaragua I’ll never forget.

A man carrying a sign with my name on it emerged and I was thrilled and amazed that he had waited for us. We made it to the front of the next line and the clerk asked us for $48 U.S. to enter the country. I handed him three $20 bills and then struggled to understand why he wasn’t handing us back our passports.

Clearly there was a problem with our poor Spanish; we couldn’t for the life of us understand what it was. I confirmed once more that he wanted $48 and pointed to the pile of bills I’d given him totaling $60. After a few minutes of mutual incomprehension, someone behind us in line came forward to interpret.

“He says one of your $20 bills is no good,” the man said, before handing what looked like a perfectly good 20 back to me.

“What’s wrong with it?” I asked, totally confused.

“He says there is a crease in the bill.”

The bill looked fine to me but luckily I had another one in my wallet that he found acceptable. After much ado, we were finally, officially allowed to enter Nicaragua.

Within a matter of minutes, we could see the twin volcano peaks of Ometepe Island rising like pyramids across Lake Cocibolca and we were bathed in the lovely artificial frost of fully functioning A/C. It felt great to be in Nicaragua.