Costa Rica News – In the past 20 years, amphibian species around the world have experienced rapid decline due to climate change, disease, invasive species, habitat loss and degradation. Populations have decreased by approximately 40 percent with nearly 200 species thought to have gone extinct since 1980. However, despite these discouraging statistics, new research efforts are turning up lost populations of some vanished frogs. A new study published in mongabay.com’s open-access journal Tropical Conservation Science reports the rediscovery of two new populations of the South Pacific streamside frog (Craugastor Taurus) in southeastern Costa Rica. This marks the first sighting of the species since 1997. 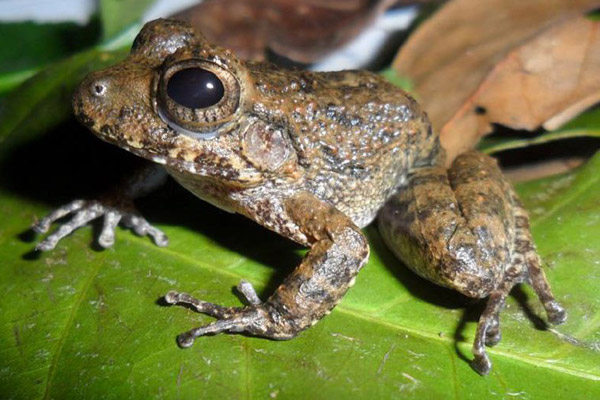 “The rediscovery of [the South Pacific streamside frogs] is one of eight recent discoveries of lost frogs in Costa Rica, which include the endemic and believed to be extinct Holdridge’s toad (Incilius holdridgei),” the researchers write in the study “The non-detection of [South Pacific streamside frogs] in historical streams is troubling, but the discovery of two populations in a new location is encouraging news.”

The new study also finds that breeding populations of the South Pacific streamside frog persist with high prevalence of the fungal disease, chytridiomycosis, caused by Batrachochytrium dendrobatidis (Bd). Past research indicates that this fungal disease was the main cause of the 1987 mass die-off of amphibians in Costa Rica, in which at least 17 species experienced population declines. Historically, frogs most vulnerable to fungal disease Bd lived along streams and at altitudes higher than 500 meters. However, some scientists consider the amphibian population decline in Costa Rica enigmatic because some declines occurred in low elevation areas where fungal disease Bd was not deemed as threatening.

The study used several methods to relocate South Pacific streamside frogs, also known as the Golfito robber frog, in southeastern Costa Rica. First, researchers reviewed museum specimen records discovering that the species inhabited 34 streams from 1963 and 1990. Then between 2000 and 2012, they sampled 47 streams and tributaries within the range of the frog.

In addition, the researchers conducted field surveys at Punta Banco in far southeastern Costa Rica taking voucher specimens from two different stream locations. The specimens were housed and identified at the Museo de Zoologia at Universidad de Costa Rica. Scientists used these new findings and historical distribution records to establish the past and current distribution range of the South Pacific streamside frog. Furthermore, the researchers performed Bd sampling by swabbing fifteen frogs. The swabs were stored in a dry and frozen state then DNA analysis was conducted at the Vredenburg Lab at San Francisco State University.

In all, the scientists uncovered two new populations of South Pacific streamside frogs, occurring in areas with a drier environment than those of its historic range. The researchers also found Bd fungal disease on twelve of the fifteen frogs with varying degrees of infection.

The rediscovery of the streamside frog is significant because the scientists have uncovered new habitat records that show surviving populations are able to live with a high prevalence and infection of the fungal disease Bd. But, most importantly, these are now the only known populations of the Critically Endangered species.

But the researchers write that more hidden populations may survive.

“Continuous sampling within the historic range might result in the discovery of additional populations. We emphasis that much more fieldwork needs to be done in order to explain the uniqueness of these two extant populations.”

By By: Victor Montoro, http://news.mongabay.com/

Is There a Problem with the Tap Water in Costa Rica? Montezuma’s Revenge CR Style?