Costa Rica News – Who would have even thought a President of another country would stash their funds in Costa Rica, teh world capital of fraud an scams? The office of Costa Rica’s Attorney General said on Monday it had frozen 6.5 million belonging to a company connected to the family of former Peruvian President Alejandro Toledo as part of a probe into financial transactions. 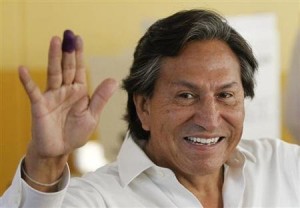 A statement from the office said it had opened the investigation at the request of Peru, whose Congress last month questioned Toledo over real estate dealings of his mother-in-law, Eva Fernenburg.

“The opening of this case is rooted in intelligence and data … as well as press reports that questioned the acquisition of a property (in an exclusive area of Peru) by a company based in our country, linked to the mother-in-law of former Peruvian President Alejandro Toledo,” the statement said.

The move comes two weeks after Toledo was questioned by Peru’s Congress over the property, a luxury home in Lima. He told Congress his mother-in-law, Eva Fernenburg, used a loan, inheritance wealth and reparation payments for being a Holocaust survivor to pay for the house.

When he spoke in Congress, he said he was the victim of political mudslinging.

“I might have made some mistakes but I am not corrupt,” Toledo told lawmakers during the inquiry.

“My hands and pockets are not stained.”

Toledo, who works as an academic and is active on the speaking circuit in the United States, is one of four probable contenders for the next presidential race in 2016 with a chance of winning, according to polls.

Among the strongest candidates is two-time former President Alan Garcia, who faces official inquiries over thousands of presidential pardons he granted to convicted drug traffickers during his 2006-2011 term.

Both politicians have denied any wrongdoing. Toledo, like Garcia, has said unproven allegations against him point to a political witch-hunt meant to derail his political future. – REUTERS