Costa Rica News – Imagine a relaxing walk through the mountains and rainforests of Costa Rica, hearing the chirping birds, the buzzing insects—and the happy yips of hundreds of dogs trailing behind you. Most dog people would love just that, and now they can experience it first hand at a sanctuary for stray dogs in Costa Rica.

Territorio De Zaguates is a no-kill shelter, homing stray or abandoned dogs from all over Costa Rica. The shelter itself was founded in 2005 in the home of Lya Battle and Alvaro Samut outside San Jose. But their house was too small to accommodate all the dogs, and around 2008, the couple moved them to 378 acres of farmland that had been left to Battle when her grandfather died.

The National Animal Health Service in Costa Rica estimates the country has about a million stray dogs out on the streets. As a result, there are new dogs coming to the shelter all the time. Workers and volunteers often go out and pick up strays that locals have told them about or taken in. Other dogs are brought in by owners who no longer want or can provide for their pets. Every dog is accepted to the shelter; to date, no animal has been turned away. 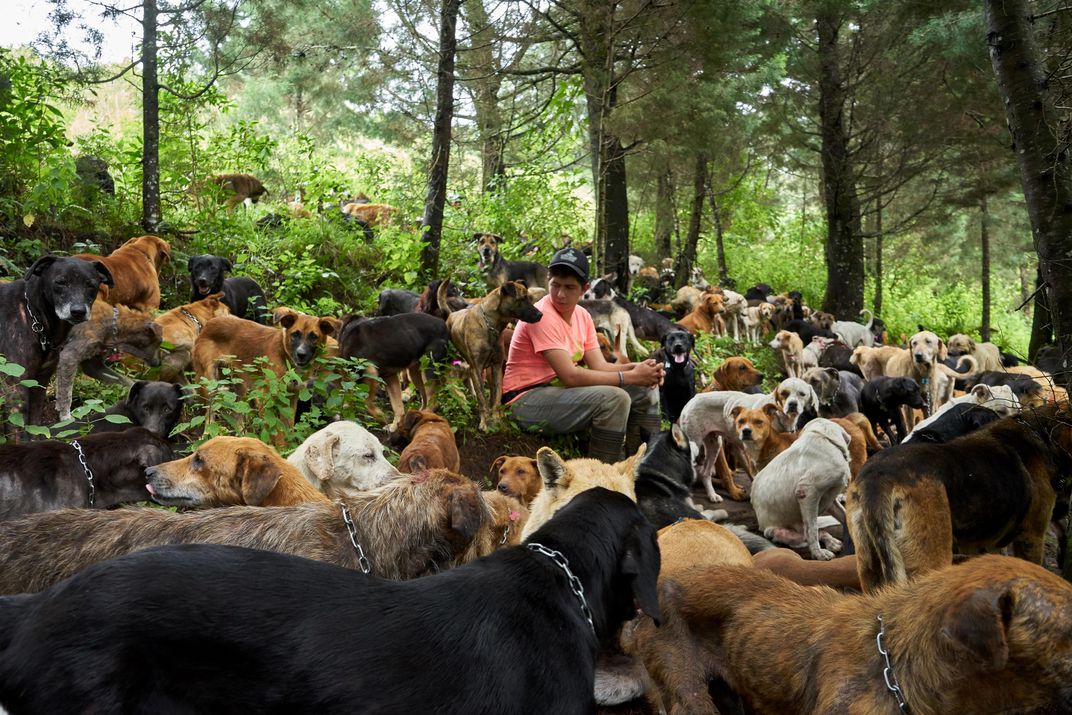 Now, more than 1,000 dogs roam the countryside of the Costa Rican estate. They go on daily walks in the mountains and eat roughly 858 pounds of food per day. They’re bathed and treated on-site for illness or injury (though more intense cases go to a specialist vet in San Jose). And most importantly, they’re given a better quality of life than they’d experience on the streets.

“There is a major problem with stray and abandoned dogs in Costa Rica,” Dan Giannopoulos, a photographer who recently visited the shelter, told Smithsonian.com. “The government line on [the] treatment of strays is to destroy them. This is the only shelter of its kind in Costa Rica. It offers a new lease [on] life to the dogs, many of whom have lived terrible lives and have terminal illnesses.”

At the shelter, six permanent workers and a legion of local and foreign volunteers work to make sure the dogs are as comfortable as possible once they arrive. For the most part, the dogs are affectionate and rarely fight—though many are recovering from illness, starvation and abuse. Regardless, they love visitors and are quick to surround guests in a battle for attention and playtime.

“There was a black Labrador with a paralyzed back leg who became very attached to me, and I likewise, during the days I was there,” Giannopoulos said. “She would wait for me when I stopped to take pictures and would always be within a few feet of me. If I had been going straight back to the U.K. I think I would have seriously considered adopting her. I was quite sad to finally say goodbye to her.”

In addition to prospective adopters and volunteers, the shelter welcomes visitors on select days to walk and play with the pack. “As a dog lover,” Giannopoulos said, “it’s pretty much paradise hanging out with hundreds of dogs, roaming fields and lush rainforests.” In the future, the shelter plans to have a hotel where visitors can stay with their favorite dogs and hopefully be convinced to leave with a new furry friend.

US Attorney That Stole $2 Million on Lam in Costa Rica?

Fishermen Versus the Coast Guard in Costa Rica