Costa Rica Entertainment – Eddie Mora, invited director guest for the 76th anniversary concert of the National Symphony Orchestra, said that had he planned it himself, it wouldn’t have come out this well. 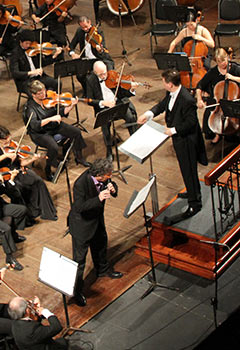 The performances on this Saturday and Sunday by Heredia symphony are special: it will be Mora’s first time directing a complete national concert where he will see his own piece come to life.

Ritual is a piece that Mora wrote for this occasion. The performance will be accompanied by, electric bass, piano and harp, among other instruments. He expressed that the piece tells a story about urban San Jose and the nightlife. According to the director it is an acidic and dark piece with rhythms used in the area, from air Caribbean to Latin rock.

In addition to the release the National Symphony will interpret No. 32 by the Austrian composer Wolfgang Amadeus Mozart, a work that has never been performed in Costa Rica.

Symphony No. 5 by the Russian, Dmitri Shostakovich will complete the repertoire.

This concert will also be an opportunity to present the album of Costa Rican music composers Volume II. Mora affirmed that orchestras that are not recording Latin American music are repeating schemes of another era. He was also the director during the recording of this album.

Mora says that they have to strengthen the constant and relentless pursuit of identity and it should be the objective of any orchestra.