Costa Rica News – A short time ago China brought over their own crews of workers to construct a “gift ” for Costa Rica. They knew that if they donated the money for this structure to be built then the government would have pocketed most of the cash and either would still be building it today or would have just given up on the construction. 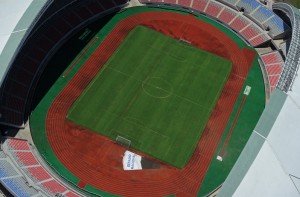 While working in the area where it was being built, it was easy to see the crews of Chinese workers going to and from the site each day early in the morning and returning at around dusk.  After it was all said and done, the Chinese had built something that Costa Rica could be proud of to call their own. The days of having concerts and large events in the confined and run down Saprissa stadium had hopefully come to a needed end.

But as it is with many of the gifts from other countries, once the keys to the stadium were turned over to the Costa Rican government and its entities it is already falling into ruin. Normal maintenance is required to keep these structures in normal working condition and aesthetically pleasing.

Take a peek at the friendship bridge (Puente de Amistad)  another “gift” to the Costa Rican government. It has fallen into ruin as well because normal maintenance has not occurred for years on it.

What is normal is for the people in charge of maintenance to let these infrastructures to get to a point where the only option is to replace the parts that should have been a part of their daily upkeep. The person responsible will point his finger at someone else and no one is held accountable.  When the repairs are needed it will then be done half ass and more money will go into the pockets of all involved.  This is exactly what is happening with Costa Rica’s National Stadium.

An image made from the air on Monday showed that the track of the National Stadium has deterioration.

Black spots across the track show that the synthetic surface lacks care, soap and water.

According to Patrick Heinen, from  HEG, which is dedicated to building sports infrastructure, the symptoms of the track how that it needs immediate maintenance.

Edgar Barrantes, general manager of the stadium, said he could not talk.

The same response was obtained from the Costa Rican Recreation Deaprtment (ICODER), an owner of the National Stadium. Alba Quesada, its director, said that the issue lies with the administration of the place.

So the guy in charge of the maintenance is not taking calls and the government entity says it is not their responsibility. Gotta wonder who is Edgar Barrantes’ cousin or brother is in government?

Not only is the track going into ruin, the roof which caught on fire do to debris accumulating and fireworks from the event was not repaired properly.

The stadium was to be a showcase for Costa Rica to attract events and concerts to put them on the map.  We are a week away from the USA vs Costa Rica World Cup Qualifying soccer game, another world stage for Costa Rica to display itself and the venue is falling apart.

With this track record the only true option is for the foreign country to both build and maintain the structure and CR has repeatedly shown it is incapable of doing so, but accountability  in Costa Rica for actions is not found even at the highest levels of government.

Are You Overqualified to Teach English in CR?