Costa Rica News – If you ever walked around downtown San Jose, there is a good chance that you encountered the smiling man playing a guitar in front of his cow.  You might have thought like many that he was just a street urchin, but what you did not know is you were enjoying the guitar playing of a steadfast part of Costa Rica culture. 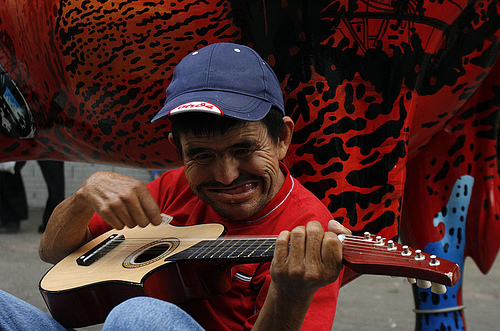 Marito Mortadela was an integral part of the San Jose community. He graced Central Avenue daily singing and playing guitar. Unfortunately, he passed away this Friday, after suffering from cardiac arrest caused by a piece of chicken obstructing his throat.

His loved ones, along with many strangers who appreciated him, held a funeral full of sentiment. The priest reminded everyone of Marito Mortadela’s humility and simplicity. He was an outstanding, hard-working person.

His niece, Stephani Solano, stated that in his 58 years he was always happy. His eternal smile will live on. Ana Maria Vargas, a neighbor, reminisced about how she always listened to his music on the way to work. He inspired many.

Marito was one of the most known and loved local celebrities. He was a good person who wouldn’t hurt anyone. He was honored 4 years ago at the Cow Parade, with a cow dedicated to his honor. Others honored him by creating works of art like murals and masks representing him. As a last gesture, balloons were released before his burial and everyone applauded the way they would for a musician after a concert.

Central Avenue will not be the same without him and his smile will be missed……..