Costa Rica Travel News – I’m from Florida, where a day at the beach means fighting for parking—often for an outrageous fee—struggling to find a bare patch of sand, and spending the day listening to loud music and shouting kids. 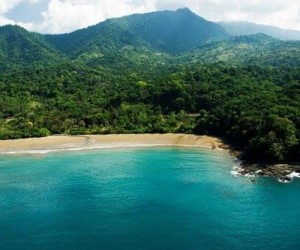 I always spent at least a few minutes dreaming what it would be like if my family was the only one on the beach. What if, instead of high-rise condos, there were swaying palms overhead, perfectly spaced to hang a hammock for an afternoon nap… and the only noise was crashing waves?

Finally I found that beach (more than one, in fact) on Costa Rica‘s southern Pacific coast: Ballena, Piñuela, and Uvita. They’re set inside the Marino Ballena National Park, which covers 270 acres of land and 13,300 acres of ocean. The park was set up to protect migrating whales, especially humpbacks, which congregate just offshore from December to April.

This region, known as the Zona Sur, or Southern Zone, is three to four hours from the capital, San Jose, and the international airport there. Access is easy thanks to new highways that zip you out of the mountains of the Central Valley to the beach and down the coast.

With no big resorts or large hotels—and with laws restricting shoreline development and capping buildings to three stories—the region remains off the main tourist trail.

Expats are discovering the area’s charms and have moved into homes dotting the hillsides above the coast. But you can still find affordable property here. For example, just a few minutes from the beach and the town of Uvita, I found a two-bedroom house with a swimming pool and ocean-view balcony for $195,000.

In fact, my favorite beach of the Southern Zone is Playa Uvita. As with the other beaches, it’s not uncommon to be completely alone here. You know the opening scenes of the old Disney movie Swiss Family Robinson when they shipwreck on a deserted, palm-lined shore? It’s kind of like that. You might see a few other people in the distance. But that’s about it—certainly no crowds.

It’s a huge beach, coming together at a point. This sandbar continues about several hundred yards into the ocean. At the end is a large rocky outcropping running parallel to the shore. Bring your mask and fins. On the south side there’s a reef that makes for great snorkeling right off the beach.

From the air—or one of the hillside homes in the region—the formation resembles a whale’s tail, hence its name. At low tide, you can walk all the way out. Just keep an eye out for the tide coming in. You’ll see the sandbar—and your path to shore—shrinking.

Sitting out at the end of the Whale’s Tail, looking back to shore, offers a great view of the vibrant green, vegetation-covered mountains that rise up in the distance. You can see the curve of the beach to the south and north. The view of the deep blue Pacific is only interrupted by rocky islands on the horizon.

If you’re looking for “your own” beach in a beautiful natural setting, you won’t get much better than this.

I too agree that the southern region is the nicest part of Costa Rica….